This Immigrant Saw ICE Arrest Her Husband — Here's What She Learned 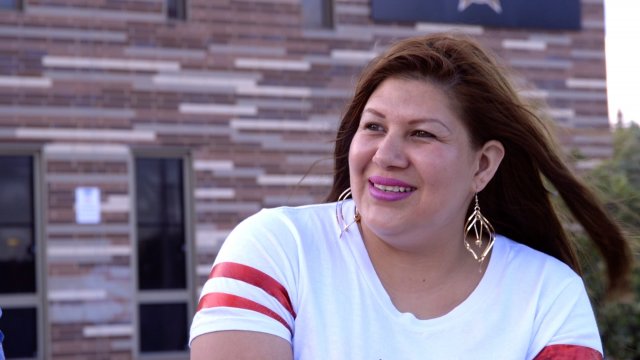 Organizations fighting deportations rely on such testimonies to learn ICE's arrest tactics and notify other immigrants in the community.

Immigrant advocates in Chicago are still preparing for the possibility of mass deportations by, among other things, holding regular know-your-rights sessions. I went to a session and although I wasn't allowed to film it, I talked to a local activist about how she witnessed her husband's arrest by ICE two years ago — and what she learned from it.

"How would you react differently today if those ICE agents came knocking on your door?"

"Well today, if I knew it was them, I wouldn’t open the door."

When ICE agents arrived at Celene Adame's home in 2017, she says they did not identify themselves as ICE. Instead, they called themselves detectives and pretended to be looking for someone other than her husband, Wilmer Catalan-Ramirez.

"I thought, 'well they’re coming to look for someone who committed a crime my husband hasn’t committed.' And I even commended them saying, 'it’s great that you all are looking for people who commit crimes because my husband has just been the victim of a crime.'

At the time of the arrest, Catalan-Ramirez, an undocumented immigrant from Guatemala, was recovering from serious wounds he sustained two months before, in what his lawyers call a random drive-by shooting. According to his lawyers, ICE officers ignored his repeated pleas to lighten up and fractured his shoulder. Adame recorded parts of the raid.

A detained immigrant is suing ICE for, he says, violating his civil rights during an arrest. But the legal barriers for faulting ICE agents are steep.

"They slammed my husband against the ground, they attacked my family, my children, my 3-year-old boy was crying; he was screaming, 'Please don't give them my dad.'"

Catalan-Ramirez filed a lawsuit against ICE for excessive use of force, unlawful entry and unreasonable seizure. ICE settled and ten months later, released Catalan-Ramirez under a supervision order. An ICE spokesperson refused to comment on Catalan-Ramirez's arrest but told Newsy that ICE agents "may initially identify themselves as 'police' because it is the universally recognized term for law enforcement and our personnel routinely interact with individuals from around the world."

"I made sure they knew, to the end even when they had my husband in handcuffs and inside a private car, people will know about this and this will not be the last time you see my face."

Because he helped Chicago police investigate his shooting, Catalan-Ramirez can now apply for a visa reserved for undocumented victims of crimes. ICE targeted Catalan-Ramirez because the city of Chicago included him in a gang database. But when he sued the city, it admitted it couldn’t verify he was in a gang.

An undocumented immigrant is suing Chicago to get his name off the city's controversial gang list, which could protect him from being deported.

"I said, 'I’m going to make sure everyone knows what’s going on here in Chicago, which is supposedly a sanctuary city.'"

Adame says her 10-month battle to get her husband out of detention and out of the gang database taught her one main lesson: sharing her story with the media and politicians was the right thing to do.

"I didn’t fear reprisals because I told myself well if I stay quiet then I would be stuck with the feeling of what if I had spoken up? What would have happened? So I thought well I’ll make it public and we’ll see what happens."

To prepare undocumented immigrants for interactions with ICE, organizations that fight against deportations rely heavily on eyewitness accounts like Adame’s.

"They won't admit it, but they were vest that says police on them.. It doesn't say ICE, it says police, you identify those individuals as police, whether they've said it verbally, that's how they're presenting. We've also seen ICE use traffic stops, which again, you identify specifically with police officers, right? And by using those traffic stops and asking these individuals about their status. And from there, being able to detain individuals. So we've seen various cases of that happen.

ICE told Newsy that ICE jackets "also display 'ICE'" and that ICE officers only "make probable-cause stops when they know or strongly suspect that the individual they are looking for is the driver/passenger in the vehicle."

As for Adame, she uses her experience to help other immigrants, as an active member of Organized Communities Against Deportations.

"I’ve been knocking on a lot of doors, meeting Congressmen and Senators. I tell people that they’re not alone and to seek help and to not keep quiet. There are a lot of informational workshops. Here in Chicago there are organizations that will defend your rights and that will fight to the final bout."