What The Fact: The History Of Universal Basic Income 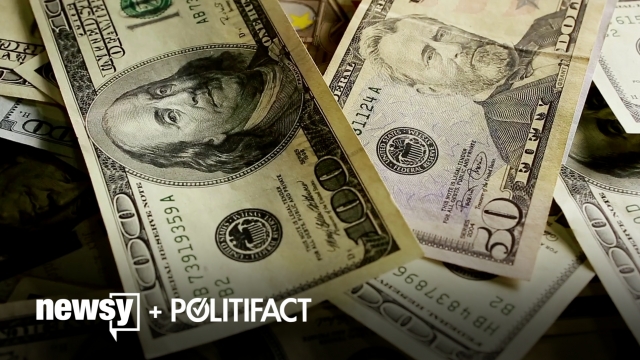 SMS
What The Fact: The History Of Universal Basic Income
By Newsy Staff
By Newsy Staff
October 25, 2019
Presidential candidate Andrew Yang wants to implement a UBI. And it turns out he's not the only U.S. politician to promote the idea.
SHOW TRANSCRIPT

Hello and welcome to "What The Fact." I'm Katie and this is Aaron, and it's time now to bring you fact-checking of the 2020 election.

Yeah we've been fact-checking all the Democratic candidates for president, like 20 of them. One of the names we didn't know much about is this guy Andrew Yang. He's a businessman, not a politician, who's kind of made some waves in early states. He has a lot of power and influence on social media, he's picking up some traction in the polls, and he's doing it with a couple of arguments. One of them is this idea called universal basic income. Basically the idea is if you're an adult you get $1,000 a month cash, every month. Now this is a big deal, Yang talks a lot about it. Some politicians think it's a little bit of a gimmick. But here's Andrew Yang saying that actually this idea goes all the way back almost to the founding of our country. Take a listen.

"When you dig into our country's history, this is a deeply American idea. Thomas Paine was for it at our founding, called it the citizen's dividend. Martin Luther King championed it in the '60s, called it the guaranteed minimum income for all Americans, and it is what he was fighting for on the day he was killed in 1968. It passed the U.S. House of Representatives twice in 1971."

Now, Katie, as far as this fact-check, is this really something that Thomas Paine and Martin Luther King Jr. and even in the case of the U.S. House, they supported in the 1970s?

Well we did our investigation and we found, more or less, Aaron, yes. We rated his statement Mostly True. Now let's take it piece by piece, starting with Thomas Paine. So we found Thomas Paine's proposal in a booklet called "Agrarian Justice," and in it, Thomas Paine writes that the earth and its uncultivated state was the common property of the human race. He believed that cultivation and private land ownership deprived non-landowners of their natural inheritance. To remedy that, he proposed a one-time payment of 15 pounds to everyone when they turned 21. More people would get money after age 50. So it's not exactly what Andrew Yang's proposal is because it's a one-time payment and not something you would get every month. But yeah, the idea is sort of there.

All right, No. 2. Martin Luther King. It's true that Martin Luther King supported a guaranteed income in his 1967 book "Where Do We Go From Here?" King saw the idea of a universal basic income as a way to challenge and solve systemic poverty. But he wasn't explicitly advocating for that idea when he was in Memphis. It was sort of related to the broader fight on poverty but it was not about a guaranteed income in particular. So again, Yang's sort of right, but not telling the complete story.

All right, let's go to our third example. The U.S. House passed legislation in 1971, twice.

It happened, yeah, this actually happened by kind of overwhelming margins. The proposal included a work requirement, but in 1971, the House voted 288-132 for an omnibus bill that included a proposal to guarantee families an annual income. Again, a little difference here, this was for families, not for individuals like Yang is proposing. And technically one vote was in 1970, the other was in 1971. But you can see why we rated this Mostly True. It's pretty much accurate but needs a little bit of clarification.

So Yang has this proposal, but we can actually kind of see how this is working. There are experiments happening around the world, one in the United States even, that'll tell us a little bit more about how universal basic income works.

Democratic presidential candidate Andrew Yang's idea for a universal basic income is the centerpiece of his campaign. Opponents say it would discourage people from working. But Yang and others believe handing out unconditional money would reduce stress, encourage new entrepreneurs and reduce administrative costs. A few places have experimented with it, so how did it go?

One of the best long-term examples of a universal basic income comes from Alaska. Since 1982, the state has given every eligible man, woman and child an equal, annual payment, regardless of need. It's called the Permanent Fund Dividend, and it's largely funded with revenue from the state's natural resources, like oil. The amount changes every year. For 2019, it's $1,606 per person. Studies of the fund show it's helped reduce poverty in Alaska, and it's had a positive impact on health issues, like reducing childhood obesity.

Finland tested the impact of a basic income in 2017 and 2018. For two years, the country gave about $625 a month to 2,000 people who'd previously received unemployment benefits. Finland is still analyzing the data, but preliminary results show the standard monthly payments didn't significantly impact people's employment. But it did make those folks more optimistic about finding a job, and they reported fewer health problems and lower stress levels.

Stockton, California, is in the midst of a universal basic income experiment called the Stockton Economic Empowerment Demonstration, or SEED. In February 2019, the city started handing out $500 a month to 125 local residents. There are no financial eligibility requirements, but recipients must live in a neighborhood with a median income at or below about $46,000. In the first five months, 40% of the SEED money was spent on food, 25% was spent on merchandise purchases and about 11% was spent on utilities. Participants say the extra money has helped them pay down debt faster, spend more time with their family and reduce stress levels. The experiment is scheduled to end in July 2020.

As for Yang's plan, his Freedom Dividend would pay every American citizen over the age of 18 $1,000 a month.

All right, so we want to hear what you think about universal basic income. Is there something that you don't quite understand or you want a fact-check about? You can always email us at  truthometer@politifact.com. And as a reminder, if you want to read the details about this fact-check and many more on the 2020 race, go to politifact.com for a lot more.