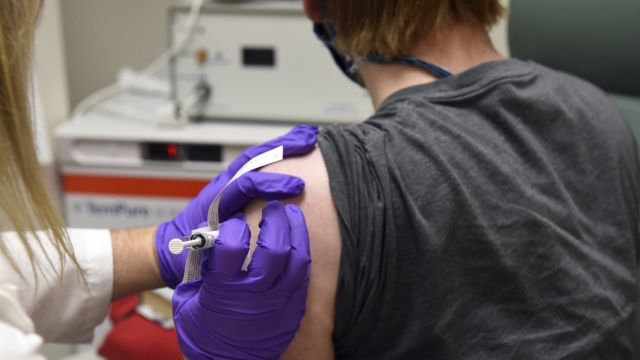 SMS
What's Next For A COVID-19 Vaccine?
By Lindsey Theis
By Lindsey Theis
November 18, 2020
If a vaccine is approved soon, vaccinations could start in December, but supply will be limited at first.
SHOW TRANSCRIPT

It’s been nine months since Jennifer Haller, the first COVID vaccine tester, got a shot during Moderna’s Phase 1 trial. Now, Moderna and Pfizer's vaccine candidates are at the head of the race, each reportedly working in about 95% of those studied.

"That is way more than expected and it's wonderful news," Haller said.

Pfizer has said it plans to submit a request for FDA emergency approval in the coming days. Moderna will likely follow in a few weeks. But don’t expect the FDA to green light any COVID vaccine quickly. Officials have said it will take weeks at the minimum.

"The decision will ultimately be determined by the scientists when we get the data set. This is new for FDA. It's new for the country, new for the world. But all of the candidate vaccines will go through the same process," Steven Hahn, FDA Commissioner, said recently.

The application process is rolling, meaning vaccine makers have already had to submit things like manufacturing plans, and initial analysis. They’ll also have to publicly present their final findings to an advisory board of medical and science experts. That board provides recommendations to the FDA and is set to meet next in early December.

"What really is happening is this independent process that is looked at by people with no skin in the game, financially or otherwise. I see the data. I get reported the data to me, the FDA sees the data soon it will be published with the entire community, will see the data," Dr. Anthony Fauci, NIAID director, said.

“We're at a point where we're really seeing the promise, where we're seeing that even these new technologies may produce vaccines that are going to help us meet this need. But we're waiting for more data, more follow up. And then, even as that becomes available, hopefully in the next couple of months and for other candidates, we also have the issue of having enough vaccine to really make an impact on the pandemic," Dr. Jesse Goodman, former chief of the FDA's vaccine division said.

Distribution will definitely pose some challenges. Health officials say if a vaccine is approved, vaccinations could start in December, but supply will be limited at first.

Drugmakers Novavax, Astra Zeneca, and Johnson and Johnson are also in the late stage, large scale phase 3 clinical trials for their potential COVID vaccines.  Not everyone will get the same vaccine if multiples get emergency approvals. Federal health officials say widespread vaccination won’t be until April to June of next year.

Meanwhile, during the hopeful news, health officials say the best thing we can all do is follow public health advice. Neal Browing, another one of the very first human vaccine testers, put it this way:

"I'm taking every precaution that is recommended by every other person. I don't treat this like I'm invulnerable and I'm going to go out and risk it. It's just not worth it," he said.