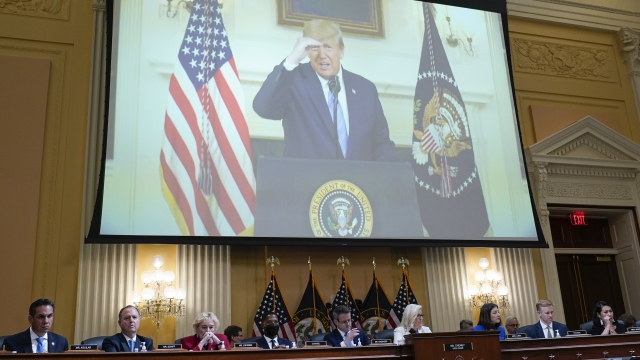 With only three months left in the year, the House Jan. 6 committee is eyeing a close to its work and a final report laying out its findings about the U.S. Capitol insurrection. But, the investigation is not over.

The committee has already revealed much of its work at eight hearings over the summer, showing in detail how former President Donald Trump ignored many of his closest advisers and amplified his false claims of election fraud after he lost the 2020 election to Joe Biden. Witnesses interviewed by the panel — some of them Trump's closest allies — recounted in videotaped testimony how the former president declined to act when hundreds of his supporters violently attacked the Capitol as Congress certified President Biden's victory on Jan. 6, 2021.

Lawmakers say there is more to come. The nine-member panel — seven Democrats and two Republicans — interviewed witnesses through all of August, and they are hoping to have at least one hearing by the end of the month. Members met Tuesday to discuss the panel's next steps.

Because the Jan. 6 panel is a temporary or "select" committee, it expires at the end of the current Congress. If Republicans take the majority in November's elections, as they are favored to do, they are expected to dissolve the committee in January. So the panel is planning to issue a final report by the end of December.

As for hearings, the panel's Democratic chairman, Mississippi Rep. Bennie Thompson, said after the private members' meeting Tuesday in the Capitol that the committee's goal is to hold a hearing Sept. 28, but that members were still discussing whether it would happen at all.

"We'll we're still in the process of talking," Thompson said. "If it happens, it will be that date. We're not sure at this point."

Members of the committee had promised more hearings in September as they wrapped up the series of summer hearings. Wyoming Rep. Liz Cheney, the Republican vice chairwoman, said the committee "has far more evidence to share with the American people and more to gather."

"Doors have opened, new subpoenas have been issued and the dam has begun to break," Cheney said at a July 21 hearing that was held in prime time and watched by 17.7 million people. "We have considerably more to do."

It's unclear if the hearing would provide a general overview of what the panel has learned or if they would be focused on new information and evidence. The committee conducted several interviews at the end of July and into August with Trump's Cabinet secretaries, some of whom had discussed invoking the constitutional process in the 25th Amendment to remove Trump from office after the insurrection.

For its witnesses, the panel has already interviewed more than 1,000 people, but lawmakers and staff are still pursuing new threads. The committee recently spoke to several of the Cabinet secretaries, including former Treasury Secretary Steven Mnuchin in July and former Secretary of State Mike Pompeo and former Transportation Secretary Elaine Chao in August.

The committee also wants to get to the bottom of missing Secret Service texts from Jan. 5 to 6, 2021, which could shed further light on Trump's actions during the insurrection, particularly after earlier testimony about his confrontation with security as he tried to join supporters at the Capitol. Thompson said Tuesday that the committee has recently obtained "thousands" of documents from the Secret Service. 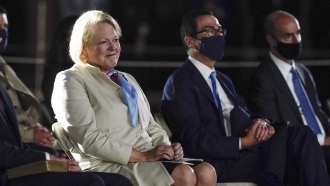 The committee has also pursued an interview with conservative activist Virginia "Ginni" Thomas, who's married to Supreme Court Justice Clarence Thomas. Lawmakers want to know more about her role in trying to help Trump overturn the election. She contacted lawmakers in Arizona and Wisconsin as part of that effort.

Members of the committee are still debating how aggressively to pursue testimony from Trump and former Vice President Mike Pence.

Some have questioned whether the committee needs to call Pence, who resisted Trump's pressure to try and block President Biden's certification on Jan. 6. Many of his closest aides have already testified, including Greg Jacob, his top lawyer at the White House who was with him during the insurrection as they hid from rioters who were threatening the vice president's life. Jacobs characterized much of Pence's thought process during the time when Trump was pressuring him.

The panel has been in discussions with Pence's lawyers for months, without any discernible progress. Still, the committee could invite Pence for closed-door testimony or ask him to answer written questions.

The calculation is different for the former president. Members have debated whether they should call Trump, who is the focus of their probe but also a witness who has fought against the investigation in court, denied much of the evidence and floated the idea of presidential pardons for Jan. 6 rioters. Trump is also facing scrutiny in several other investigations, including at the Justice Department and over the classified documents he took to his private club.

Another bit of unfinished business is the committee's subpoenas to five House Republicans, including Minority Leader Kevin McCarthy of California.

In May the panel subpoenaed McCarthy and Reps. Jim Jordan of Ohio, Scott Perry of Pennsylvania, Andy Biggs of Arizona and Mo Brooks of Alabama. The panel has investigated McCarthy's conversations with Trump the day of the attack and meetings the four other lawmakers had with the White House beforehand as Trump and some of his allies worked to overturn his election defeat.

The five Republicans, all of whom have repeatedly downplayed the investigation's legitimacy, have simply ignored the request to testify. But the Jan. 6 committee seems unlikely to meet their defiance with contempt charges, as they have with other witnesses, in the weeks before the November elections. Not only would it be a politically risky move, but it is unclear what eventual recourse the panel would have against its own colleagues.

In all, the committee must shut down within a month after issuing a final report, per its rules. But lawmakers could issue some smaller reports before then, perhaps even before the November elections. Thompson said earlier this summer that there may be an interim report in the fall.

The release of the final report will likely come close to the end of the year so the panel can maximize its time. While much of the findings will already be known, the report is expected to thread the story together in a definitive way that lays out the committee's conclusions for history.

The committee is expected to weigh in on possible legislative changes to the Electoral Count Act, which governs how a presidential election is certified by Congress.

A bipartisan group of senators released proposed changes over the summer that would clarify the way states submit electors and the vice president tallies the votes. Trump and his allies tried to find loopholes in that law ahead of Jan. 6 as the former president worked to overturn his defeat to President Biden and unsuccessfully pressured Pence to go along.

The Jan. 6 panel's final report is expected to include a larger swath of legislative recommendations.