What Parents Need To Know As RSV Cases Surge 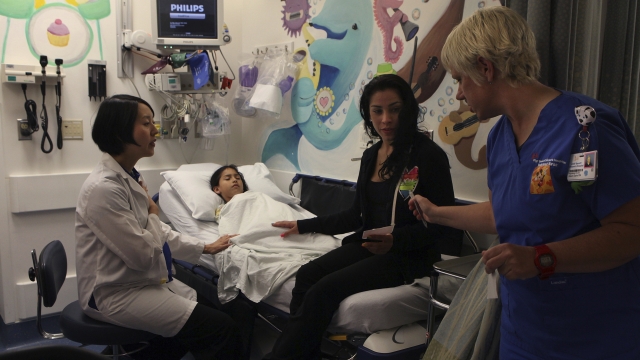 With RSV and flu surging alongside cold and COVID season, there’s much for parents and caregivers to think about.

Several respiratory illnesses in children are circulating, and more children are going to the hospital for them. The flu and RSV season are earlier this year, and cases are peaking now.

Cynthia Layton noticed her two month old’s cough and wasn’t taking any chances, as RSV is more severe in infants.

"We noticed that she was coughing a lot and had a really runny nose, so we took her in to the doctor and they tested her and said RSV," Layton said.

Many hospitals test for COVID, influenza and RSV all in one test, as all three are said to be rising.

The latest CDC data shows about 8% of children under 12 have had the updated Omicron COVID booster shot. About 22% have gotten their flu shot.

Dr. Andi Shane, medical director for hospital epidemiology at Children's Health Care of Atlanta, explained most RSV infections last between three to eight days. Usually, the middle days are the worst. Most care will require keeping a child comfortable, making sure they can eat, sleep, and breathe. Sickness will look different in older children than in infants.

Medical experts say the break in flu and respiratory illness hospitalizations brought on by COVID is over, with hospitals already seeing a big change.

"If they have any difficulty breathing, take them for medical attention," Dr. Shane said. "Younger infants can't really cough with a lot of force, and that's one of the things that happens with RSV is that the airways become even smaller than they are."

"You'll see their neck muscles going in and their chest muscles going in, and that's really noticeable in a child who's lying down as well," Dr. Shane said. "You might also see that their nose starts to flare out as they're trying to get more and more oxygen into their lungs."

There is a monoclonal antibody injection usually given to patients who were born premature or who have underlying lung or heart conditions.

The CDC said children usually encounter RSV outside of the home. The virus can survive for hours on hard surfaces like tables and crib rails and on soft surfaces like tissues or hands for a shorter time.

In Colorado, Dr. Reginald Washington said most importantly, if your child is sick, keep them at home.

"We are seeing a surge in all respiratory viruses, including RSV," Dr. Washington said. "We're not at capacity yet, but we have become very close, not only in our intensive care unit but in our general medical surgical unit as well."

Their emergency rooms are seeing a surge too, with parents bringing in their kids to see which respiratory illness they might have.