What Ohio's Special Election Could Mean For The Midterms 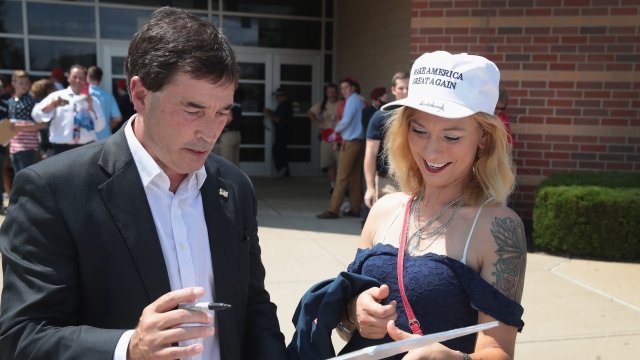 SMS
What Ohio's Special Election Could Mean For The Midterms
By Andrew Rafferty
By Andrew Rafferty
August 6, 2018
Ohio's special congressional election could be the clearest sign yet of what's to come in the midterm elections.
SHOW TRANSCRIPT

There is one more special election to go before the midterms.

And this one could be the best indicator yet of how things could play out this November.

Polls show a surprisingly close race between Democrat Danny O'Connor and Republican Troy Balderson in an Ohio congressional district that President Donald Trump won by 11 points in 2016. The last time a Democrat won the seat was 1980.

"A loss in this special election, even though it really doesn't mean much politically in terms of power in Washington. One seat doesn't swing the difference a few months before the lame duck Congress starts, but it would be a very bad omen for the party heading into the general election," said Republican strategist Ryan Williams. "And it would be a morale boost for Democrats looking to show their donors and their supporters they are on the verge, potentially, of some big wins in November."

Democrats will need to flip 24 seats to take back the majority in the House of Representatives. And this battle, taking place just 13 weeks before Election Day, has attracted a flurry of activity in recent weeks.

Trump and Vice President Mike Pence each made campaign appearances for Balderson down the final stretch of the race.

"We must elect Troy Balderson. We have to elect Troy. So get your friends, get your neighbors, get your family, and get out and vote for Troy on Tuesday," Trump said during an Ohio rally.

And millions of dollars of outside spending have flooded the suburban Columbus district from both Republican and Democratic groups.

"They see the symbolism that would come with a Democratic win in a Trump district. They see that it would be a real problem," Williams said. "So Democrats want to put the seat in play, they want to make it close or win it. Republicans want to stop an upset victory here to give the Democrats momentum heading into Election Day, so they're pulling out all the stops."

Democrats have generally over-performed or even won in comparable special elections in red areas of the country. Just this March, Democrat Conor Lamb won in a Pennsylvania district Trump carried by nearly 20 points.

But these contests are notoriously difficult to predict. It is tough to forecast who will show up to vote. And even if the Democrats pull off an upset, O'Connor will still have to defend the seat again on Nov. 6.