What The Latest In Gravitational Waves Tells Us About Neutron Stars 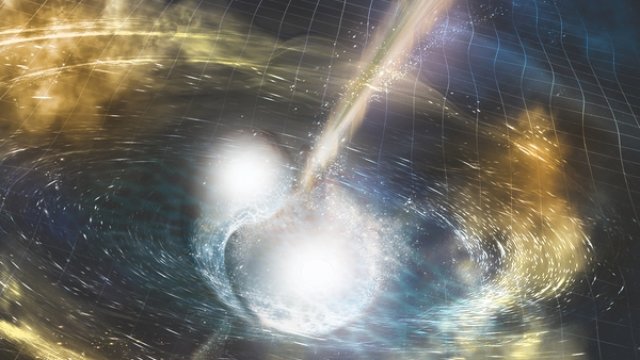 SMS
What The Latest In Gravitational Waves Tells Us About Neutron Stars
By Sarah Schlieder
By Sarah Schlieder
October 16, 2017
A recent discovery confirms a long-standing hypothesis: that neutron star collisions helped form the chemistry of our universe.
SHOW TRANSCRIPT

Neutron stars are remnants of supernova explosions. They're the smallest, densest stars in the universe — with a mass almost twice that of our sun but squeezed into an object the size of a large city.

The new discovery helps confirm the long-standing hypothesis that neutron star collisions played a large role in forming the complex chemistry of our universe, evolving from just hydrogen and helium to what we see today. Scientists speculate such collisions created many of our heavy elements, including gold, silver and platinum.

The neutron stars spotted by LIGO spiraled around each other until finally colliding, releasing energy in the form of gravitational waves and distorting space-time. The impact sent out a wave of particles that eventually merged to form elements.

The LIGO and Virgo detectors pinpointed the stars' location. That let other researchers using ground-based telescopes observe the collision and its aftermath — also known as a kilonova.

What happened next is still a little fuzzy. The kilonova could have immediately collapsed into a black hole or become its own neutron star, depending on the amount of mass present. Any extra mass would've sent the kilonova tumbling into a black hole.

Scientists say more observations of these rare cosmic events could help astronomers better understand the physics behind them.