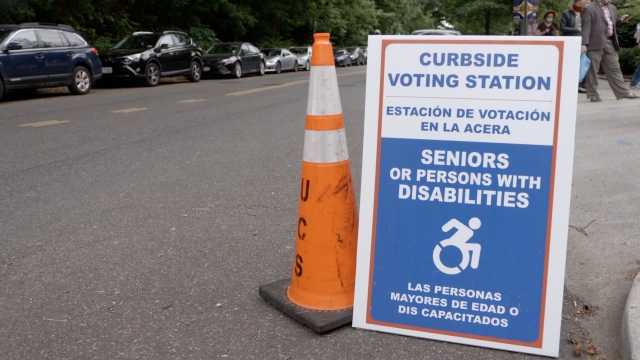 SMS
This Is What It's Like To Vote With A Disability During The Pandemic
By Shira Tarlo
By Shira Tarlo
October 8, 2020
For many Americans with disabilities, voting has been a longtime challenge. With the pandemic, it's an entirely new beast.
SHOW TRANSCRIPT

These barriers to voting that Treishmann has faced may sound familiar to the more than 38 million voting-age Americans living with a disability. That's more than 16 percent of the electorate, according to new projections from Rutgers University.

"We've seen some elections decided by fairly close margins, and so 38 million people obviously can easily make a difference," explained Douglas Kruse, the director of the Program for Disability Research at Rutgers University and one of the study's co-authors.

The Rutgers total is made up of eligible voters with a range of challenges including mobility, hearing, vision and cognitive impairments, with many falling into multiple categories.

"I'm voting absentee, and I already submitted my ballot," explained Trieshmann. "There's a lot of medical documentation you have to submit in order to consistently vote absentee, which I think is wrong because it also privileges those who have access to consistent medical care and puts those who do not, who possibly can't afford that or can't access that, who live in places where transportation isn't accessible or doesn't exist, at a distinct disadvantage for voting."

The pandemic has led nearly every state to change how they conduct their elections, with many waiving witness and photo ID requirements and expanding mail-in voting. But for many Americans with disabilities, voting by mail isn't always a viable alternative.

"Mail-in voting limits a blind person's privacy and independence, whereas if an audio machine was brought to me, I would be able to make my selection just by listening to the voice on the machine. But if I had a mail-in ballot, that would make it more difficult because I would have to rely on someone else to read it for me," explained John Kalkanli, who is visually impaired. "And even if I got assistance, how can I trust them? How can I make sure they filled out my ballot the way I wanted?"

Kalkanli plans to cast his ballot in person at an early voting site with an electronic voting machine, which he used for the first time during the 2018 midterms — an experience he called "powerful."

"It was really a blessing. I was able to cast my vote independently and privately without relying on somebody for assistance, and that's what it's about," said Kalkanli.

Advocates believe change is underway. The Biden campaign has built a disability coalition, which hosts weekly calls; hired people with disabilities; and provides captions and ASL interpretation at virtual events.

"We have been able to uniquely run an accessible campaign that opens our doors to far more people than any campaign ever before," said Molly Doris-Pierce, the Biden campaign's disability engagement director.

The Trump campaign has not released a disability policy — and the president notably angered disabled activists in 2015 when he mocked a reporter with a congenital joint condition called arthrogryposis. But earlier this year, Lara Trump spoke on behalf of the campaign at a virtual summit hosted by the American Association for People with Disabilities, touting billions of dollars earmarked for vocational rehabilitation grants.

"President Trump's 2021 budget for the Department of Labor included $3.8 billion for vocational rehabilitation to help individuals with significant disabilities prepare for and remain in the workforce," Lara Trump, a senior adviser for the Trump campaign, said earlier this year during a virtual AAPD summit.

"Candidates are increasingly recognizing the importance of voters with disabilities and integrating that into their campaigns and their platforms," said Michelle Bishop, voter access and engagement manager at the National Disability Rights Network, an advocacy organization established by Congress to protect the rights of people with disabilities. "We're moving in the right direction. It's more to me that we're just doing it very slowly."