What Is The Masters Tournament Without Tiger Woods And Arnold Palmer? 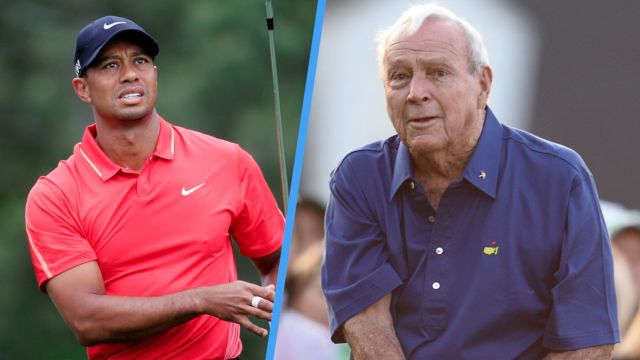 Despite Tiger Woods withholding from the tournament and Arnold Palmer not taking his ceremonial first tee shot, there's still plenty to watch for.

Two of golf's biggest names won't be fully participating in one of the sport's biggest tournaments.

Health problems are causing issues for both Tiger Woods and golf legend Arnold Palmer ahead of this year's Masters Tournament in Augusta, Georgia.

Even though Woods said he was "progressing nicely" in February, he'll be skipping the tournament entirely as he continues to rehab from a bad back.

He hasn't played competitively since the Wyndham Championship in August.

For 86-year-old Palmer, a shoulder injury will hold him out of the ceremonial first tee shot. It's the first time since 2007 that Palmer won't hit, although he'll still be in attendance for the tournament.

The void of Woods, Palmer and their combined eight Masters wins is a tough pill to swallow, but there's still plenty to be excited for during this year's tournament.

For starters, golf legends Jack Nicklaus and Gary Player will still be teeing off for that ceremonial first shot. Player says he'll be dedicating his shot to Palmer.

As for the competition, 22-year-old Jordan Spieth will go for back-to-back Masters wins at Augusta National — something that's only been achieved four times. It hasn't been done since 2002.

But he'll have to get past Jason Day and Rory McIlroy to do so. Betting site Bovada ranks both of them with better odds of winning the Masters than Spieth.

First round of the Masters starts Thursday.

This video includes clips from EA Sports, Under Armour, TaylorMade and Bose, and images from Getty Images.

The Saudi government has denied any involvement in the Sept. 11 attacks. But the family members said Trump blamed the Saudis in an interview.

20 players have now defected from the PGA Tour, with Patrick Reed the latest former Masters champion confirmed on Saturday as signing up to LIV Golf.

The battle between the two tours has been brewing for months and has left players divided over the topic of pay.