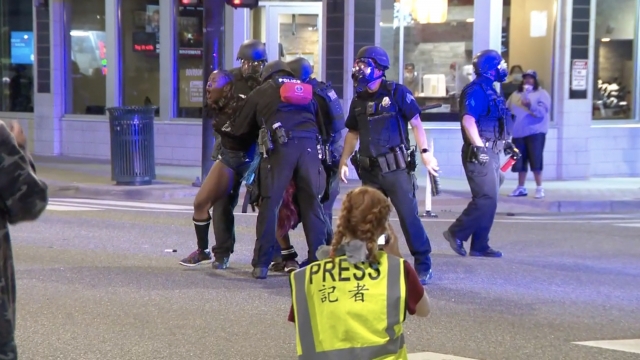 Lawmakers on Capitol Hill are trying to negotiate a bipartisan bill to reform federal policing laws, and qualified immunity is a key sticking point.

Qualified immunity protects government officials, including police officers, from lawsuits. It means you can only sue if the violation of your rights has already been "clearly established."

"It requires civil rights plaintiffs to show not just that their rights were violated, but they also have to find a prior judicial decision in their jurisdiction, where someone else's rights were violated in nearly the same way," said Jay Schweikert, a research fellow at the Cato Institute's Project on Criminal Justice.

The concept is not written in U.S. law. Rather it's a consequence of court rulings.

Opponents argue it prevents the public from holding law enforcement officials accountable for their actions — something that happens with most other professions.

"When we think about professionals doing their job, we recognize that mistakes happen sometimes. And for that reason, we do require certain professionals to carry insurance. That's the reason why we all carry insurance for our automobiles, because we recognize that accidents happen," said Teri Ravenell, a professor of law and the Associate Dean for Faculty Research & Development at Villanova University.

Supporters worry that without qualified immunity, courts would get bogged down with a swarm of lawsuits and police officers might be afraid to do their job.

But the state of Colorado shows the result might not be that extreme. In 2020, the state eliminated qualified immunity for most of its police officers, making them individually liable up to $25,000.

"While there have been some suits brought under this new provision, it has absolutely not been the flood of frivolous litigation that some defenders of qualified immunity predict," said Schweikert.

One compromise option lawmakers are considering is changing the provision to make the department liable in civil cases instead of the individual officer.

"If we do that in law enforcement, the employer will change the culture. As opposed to having one officer change or not change, we'll have all officers transforming because the departments are taking on more of that burden," said Sen. Tim Scott, a Republican from South Carolina.

But Jay Schweikert from the libertarian CATO Institute says department liability would only work in conjunction with individual liability.

"It is, in essence, telling the public, you know, we've heard your complaints about officer misconduct. In response, we're going to say it's impossible to hold individual officers accountable. But don't worry, you the taxpayer, will now be on the hook financially for all of their misconduct," said Schweikert.

But that's already happening now. A study published in 2014 found police officers rarely contribute to any judgment or settlement against them in civil rights cases. In the more than 9,200 cases examined, police officers paid just .02% of the total dollar amount awarded to the plaintiffs.

"If we're actually talking about damages, then they've often also suffered some sort of real or actual injury. So if they aren't compensated, then that loss ends up falling on them," said Ravenell.

It was a 1982 Supreme Court ruling that gave us the qualified immunity as it's understood today. The court has heard dozens of cases since then dealing with the doctrine, but only a handful of plaintiffs have convinced the justices that qualified immunity should not apply.