What Is A Wall? Semantics May Help Move Shutdown Negotiations Forward 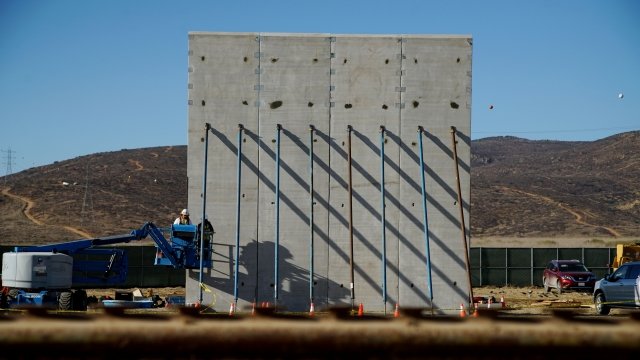 The government shutdown has highlighted how the president and Democratic leaders widely disagree on the necessity, effectiveness and cost of a border wall.

"We'll obviously be discussing the wall, which is desperately needed," President Trump told reporters on Sunday.

"We want the symbol of America to stay as the Statue of Liberty, not a big concrete wall," Senate Minority Leader Chuck Schumer said Monday.

"A wall is an immorality," said Speaker of the House Nancy Pelosi.

But a simple semantic question could be the key to ending the impasse: What is the definition of a wall?

"They don't like concrete, so we'll give them steel," Trump said on Sunday.

President Donald Trump and his chief of staff argue that a change in wall materials could advance the negotiations.

"If he has to give up a concrete wall, replace it with a steel fence in order to do that so that Democrats can say, 'See? He's not building a wall anymore,' that should help us move in the right direction," acting White House chief of staff Mick Mulvaney said on NBC's "Meet the Press."

But so far, Democrats seem unimpressed. They still want to reopen the government before negotiating on border security — or on what constitutes a wall.

"There's no requirement that this government be shut-down while we deliberate the future of any barrier, whether it's a fence or a wall," said Democratic Sen. Dick Durbin on CBS' "Face the Nation."

Trump has doubled down on his signature campaign promise, but until recently, he seemed satisfied calling the existing barriers along the border "the wall". These fences, which were built before his administration, cover 653 miles of the 2,000-mile border between Mexico and the U.S.