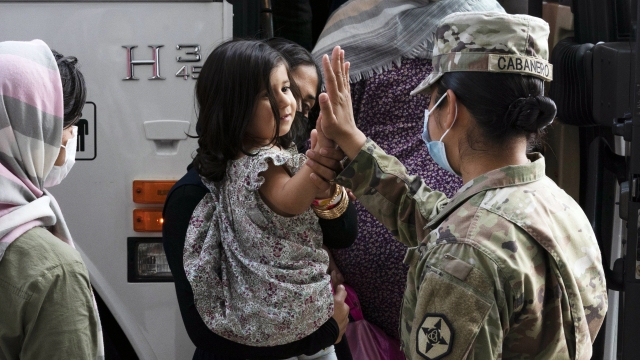 SMS
What History Shows About American Support of Refugees
By Amber Strong
By Amber Strong
September 1, 2021
American views toward refugees from war-torn nations have ebbed and flowed over time.
SHOW TRANSCRIPT

Minhaj Hassan of Islamic Relief USA says donated prayer rugs are one way his group is hoping to make refugees feel at home.

"It's kind of like starting all over again, and you're traumatized," Hassan said. "You don't know what the next day is going to be like."

Islamic Relief USA has been collecting donations from around the country for weeks.

"There definitely is a heightened level of interest. And so that's always a positive sign. I mean, obviously, the situation is very dire," he said.

At World Relief, Matthew Soerens says volunteers have opened their homes to refugees, others have shipped boxes of donations and blanket.

Meanwhile, across the U.S., Maryland Gov. Larry Hogan said, "Maryland receives more of these SIV's than nearly any other state, and we stand ready and willing to do even more."

Governors on both sides of the aisle have offered to take in the tens of thousands of refugees.

Edward Ahmed Mitchell of the Council on American Islamic Relation said, "I'd love to see people across our nation, consistently welcoming, welcoming refugees, regardless of what country they're coming from, as long as they are genuinely in need."

Humanitarian groups say the outreach today is somewhat different from the Syrian refugee crisis, when a 2015 terror attack in France turned the political tide.

"The first duty of our government is to keep the American people safe," Rep. Paul Ryan said at that time. "That's why the House today will vote on a plan to pause our Syrian refugee program."

Soerens said, "You had I think, roughly 30 governors saying we don't want Syrians in our state. And that was based on what turned out to be a terrorist attack in France perpetrated by French nationals, it really didn't have anything to do with the US refugee vetting process. There was no failure there."

This time around, there have been some members of the GOP, including the former president, who've questioned the vetting process and whether Americans should be priority in evacuations.

The overwhelming majority of Americans, 81%, say the U.S. should help Afghan translators to come to the states. And the outpouring of donations seems to back it up.

As history has shown, that could change. American views toward refugees from war-torn nations have ebbed and flowed over time.

Groups like World Relief say regardless of the conflict, their mission is clear.

"Beyond our normal obligation for those of us who are Christians to care for the vulnerable to love our neighbors. These are also individuals to whom our country made a commitment that if they stood with the U.S. military with us operation in Afghanistan, we would stand with them."