What Happens To Delegates After Their Candidate Drops Out? 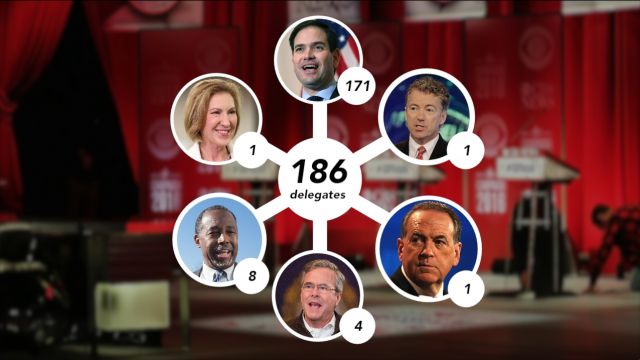 "Tonight I am suspending my campaign," Jeb Bush said in February after the South Carolina primary.

"I am leaving the campaign trail," Dr. Ben Carson announced at CPAC in March.

"It is not God's plan that I be president in 2016 or maybe ever," Florida Sen. Marco Rubio said after losing his home state's primary.

The GOP presidential race has been whittled down to three, but six former GOP candidates took a few delegates with them when they left the race.

All told, there's an estimated 186 delegates now supporting ex-candidates; the vast majority backed Rubio. So what happens to these orphan delegates? Like most things in this election, it's a bit complicated.

Most of those delegates are now "unbound," meaning they can support whomever they chose. But states like Virginia and Nevada require delegates to vote for their pledged candidate in the first round of convention voting — no matter what.

These unbound delegates are also a reason why endorsements from suspended campaigns are so important: It helps to guide not just supporters but the delegates to someone their first choice considers acceptable.

So yes, 186 delegates is a pretty big number and Donald Trump, John Kasich and Ted Cruz are all hoping some portion will eventually join their camp. But if no candidate reaches the requisite 1,237 delegates required to clinch the nomination by the first vote, we'll get a contested convention.

And that means, the vast majority of the 2,472 delegates will be up for grabs for everyone.