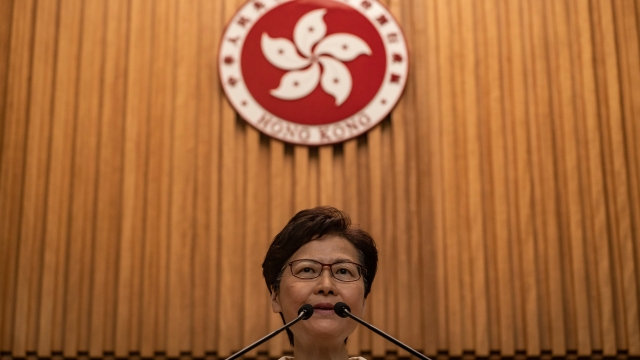 Carrie Lam faces mounting pressure to resign but has reiterated her commitment to seeing Hong Kong through its political crisis.

Demonstrators in Hong Kong have demanded the resignation of Chief Executive Carrie Lam. But what would happen if she were to step down?

Lam has faced mounting criticism since June, when Hong Kongers first staged protests against an unpopular bill that would have let China extradite suspects from the city.

Her administration took another hit this week when she reportedly told business leaders in a private meeting that she'd resign if China allowed it. But on Tuesday, she denied ever trying to quit and reaffirmed her administration's commitment to seeing Hong Kong through the current crisis.

Beijing has reiterated its support for Lam's leadership but also made clear that it's ready to intervene if protests continue. Chinese officials have reportedly floated several measures in preparation for a potential crackdown, including a ban on face masks.

Should Lam resign, interim leadership would be assumed by the chief secretary for administration for up to six months. A 1,200-member election committee would choose a new leader within that period, but China would have veto power over the committee's decision.

China's ability to play such an integral role in Hong Kong's political affairs underscores the reason that thousands of residents are protesting Lam's administration.

Hong Kong operates as a semi-autonomous state, but many residents feel Beijing has an increasing influence over it. In 2012, students staged protests against a proposed curriculum on "patriotic education." Two years later, residents rallied against Beijing for 79 days in what came to be known as the Umbrella Movement.

During a rally Monday, one student protester told Al Jazeera: "Our city's officials have all but abandoned us, and their talks mean nothing. We'll keep coming out to bring the pressure to bear."

Correction: A previous version of this story incorrectly said demonstrators in Hong Kong have been calling for Chief Executive Carrie Lam's resignation for six weeks. They've been calling for her to step down since at least June.