Congress Has Legalized Hemp. What Does That Mean For CBD? 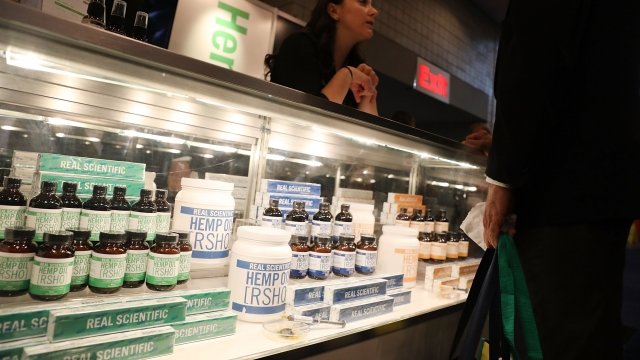 SMS
Congress Has Legalized Hemp. What Does That Mean For CBD?

By Kellan Howell
December 14, 2018
Now that hemp is legal, there's more buzz around CBD, but CBD is very misunderstood and it's legal future is hazy.
SHOW TRANSCRIPT

Congress just legalized hemp in the new Farm Bill, and that means hemp products could soon be hitting store shelves near you, including CBD.

CBD or cannabidiol is the non-psychoactive chemical component of cannabis.It’s proponents say it can help with anxiety, stress, pain, insomnia even cancer.  You can already buy it in oils, balms, lotions, drinks, even pet supplements.

CBD can be extracted from both hemp and marijuana. The two plants are both members of the cannabis plant family, but marijuana contains much more of the psychoactive component THC and it is still considered federally illegal. So, CBD’s legal future is hazy.

"The CBD that’s part of marijuana is still going to be illegal under federal law, but that’s the strain of marijuana that is used for medicinal benefits, often for example, kids that have epilepsy will use CBD to reduce the level of seizures," said Michael Collins, director of the office of national affairs at the Drug Policy Alliance.

The FDA recently approved Epidiolex, a CBD-based treatment for epilepsy, but that medication uses CBD that’s sourced from marijuana.

Proponents claim CBD is kind of a wonder drug that can help with all kinds of medical issues.

"There’s so many people that walk through our door who are stuck on these pharmaceutical drugs and they’re just complaining about the side effects and they come back a week later and often more times than none they say they have stopped their pharmaceutical drugs, it’s just amazing," said Josh Gutierrez, owner of Gold Care LLC, a hemp CBD dispensary in Colorado.

But experts say there isn’t enough evidence to prove hemp CBD has the same medical benefits as CBD from marijuana.

"You know a lot of people, especially in the public health community, think that it’s been oversold or mis-sold as having this medical benefit," Collins said. "And I think that’s one of the reasons we need better regulation of the hemp industry and hopefully that’s what this legalization will bring and sort of a stronger federal government role. Because you see, whether its online or in shops, there’s a lot of snake oil really being sold, you know under the guise of CBD".

The CBD that’s currently on the market isn’t regulated, and they often don’t contain what they say they do.

"I think what’s happened is some cunning entrepreneurs shall we say have taken advantage of the fact that hemp does have CBD in it and have kind of marketed it as if it is something that has the same benefits as the CBD from marijuana, but it doesn’t," Collinsa said.

But with legalization comes regulation, and that means better labeling and better understanding of what is in hemp CBD products as they start to become more widely available.

And legalization will make it easier for researchers to access hemp CBD in order to study it’s potential health  benefits. States can also apply for federal research grants to study hemp.