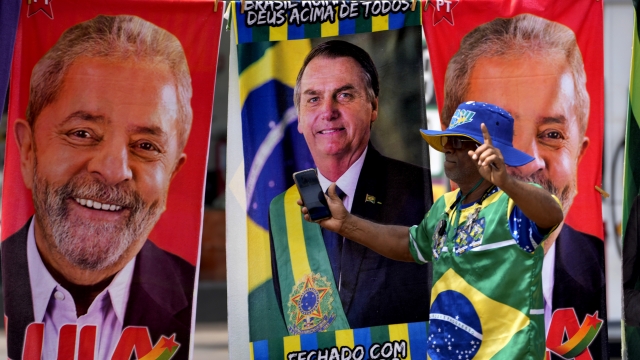 An election where democracy itself may be on the line is happening Sunday in Brazil, and it could foreshadow the future of democracy, both in the U.S. and abroad.

Brazil is a powerhouse of its continent, both economically and geographically, with a history of both being colonized and colonizing others, of slavery and westward expansion that exploited natural resources while displacing and killing Indigenous peoples. Then, it became a melting pot for immigrants around the world.

But the country's right-wing populist president, Jair Bolsonaro, is threatening to cling to power in the runoff elections, even if the votes show he loses against left-wing candidate and familiar face for many Brazilians, former President Luiz Inacio Lula da Silva.

Bolsonaro's closing message focused on presenting a vision of his country rooted in Christianity, standing for big business growth, and police, and against things like socialism and abortion. Lula has focused on his prior terms, during which commodities exports surged and tens of millions of Brazilians joined the middle class.

Lula won more votes in the first part of the elections, but Bolsonaro had a stronger than-expected showing. With neither candidate crossing the 50% vote threshold, the election had to go to a runoff. Lula is still favored to win, but polling has proved less than reliable so far.

But, things might get murky from there. Bolsonaro's coalition is still expected to control majorities in both chambers of Brazil's National Congress, and it's unclear whether Bolsonaro will actually give up power. He's already spread false allegations about secret vote counting and rigged voting machines, leading to high levels of mistrust in the electoral process.

Bolsonaro has already said he won't accept a result that isn't a win and laid out some objectively morbid alternatives.

"We have three alternatives, especially for me: jailed, killed, or victorious," Bolsonaro said. "I say to the scoundrels that I will never be jailed."

Brazil also has a history of coups, including a military dictatorship that ruled for more than two decades until 1985, and Bolsonaro seems to have a taste for that era.

In a 1993 speech, eight years after democracy was instituted, Bolsonaro said, "I am in favor of a dictatorship."

He wanted Brazil to follow the path of then-Peruvian President Alberto Fujimori. Fujimori pulled a self-coup, using the military to close Congress and the federal judiciary and give all three branches of government to himself, the president.

Bolsonaro told The New York Times, also in 1993, "I sympathize with Fujimori," and that the self-coup approach was "the way out for Brazil" at the time.

He's still spoken glowingly about Brazil's dictatorship era over the past decade.

When voting to impeach former President Dilma Rousseff in 2016, he dedicated his pro-impeachment vote to a colonel who had led a torture unit in the dictatorship era. Rousseff used to be a guerrilla fighter and was one of those tortured.

While campaigning for president in 2018, he told NPR he thought the dictatorship was a "very good" era for Brazil. In office, Bolsonaro has brought back annual celebrations of the coup that put the military into power, focusing on the military's role in fighting communism.

But, when he first ran for president, he said if a military official takes power, it should be via voting rather than a coup. However, those comments didn't mention what would happen if it came down to staying in power.

So, if Brazil has its own version of the United States' 2020 election — or a Capitol riot or a coup — what does it mean for the U.S.?

Firstly, the U.S. has a potential role here. President Joe Biden has already made promoting democracy at home and abroad a priority, and the Biden administration can apply pressure. Threats of sanctions or loss of economic opportunities could lead big businesses pushing Bolsonaro to avoid taking the most drastic measures to retain power.

On the other hand, lessons from Brazil could quickly be imported from Bolsonaro to the American right. Former President Donald Trump offered a personal endorsement for Bolsonaro, a rarity in a world where political leaders don't usually make international election endorsements.