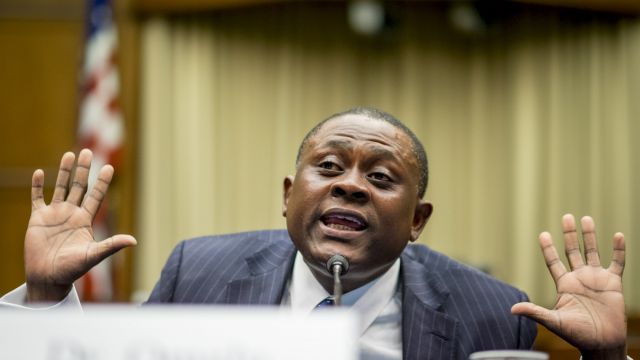 SMS
Clinton Gets Toxic Diagnosis From Well-Known Doctor After 9/11 Stumble
By Matt Picht
By Matt Picht
September 15, 2016
The doctor who discovered the NFL's concussion problem has a new theory: Hillary Clinton is being poisoned.
SHOW TRANSCRIPT

Hillary Clinton is definitely not being poisoned by the Russians. So why is one famous doctor raising the possibility in the first place?

Dr. Bennet Omalu is the forensic pathologist who first published findings about chronic traumatic encephalopathy in football players, sparking a debate about how the NFL handles concussions. His work has been widely lauded, and his story was dramatized in the Will Smith film "Concussion."

His latest expose is somewhat less plausible. After Clinton stumbled while leaving a 9/11 ceremony, Omalu speculated she might've been poisoned. He then pointed fingers at Donald Trump and Vladimir Putin, saying "with those two all things are possible."

By speculating on Clinton's health from afar, Omalu joins a long line of physicians who've injected their perspective on how physically and mentally fit the candidates are without ever examining them.

And while discussing Trump's mental health, Dr. Gail Saltz told CNN: "It certainly makes you think about intense narcissism, right? Everything has to refer to me, and I have to be the best."

The speculation got so bad early on in the campaign that the American Psychiatric Association published a sharp rebuke of psychiatrists who were breaking the unwritten Goldwater Rule of politics: Never publicly psychoanalyze a candidate you haven't formally examined.

To tamp down the speculation, Clinton's doctor recently released an updated summary of the candidate's health. That note, which included bloodwork results, didn't mention anything about poisons, Russian or otherwise.