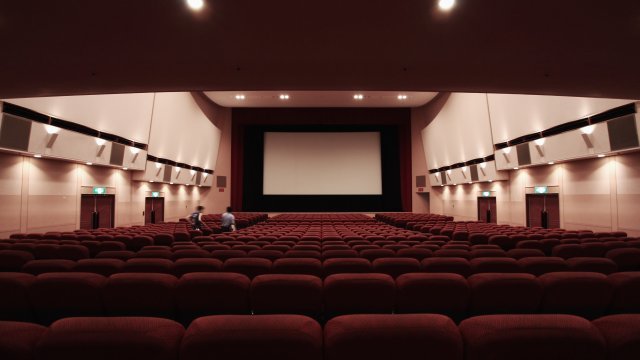 SMS
Harvey And Boxing Give The Box Office Its Worst Weekend In 16 Years
By Jamal Andress
By Jamal Andress
August 27, 2017
The box office made $64 million this weekend. The last time it did that poorly, "Hardball" was in theaters.
SHOW TRANSCRIPT

With no major movie releases this weekend, most of us chose to check out a different spectacle. Watching the fight was kind of like going to movies: There was lots of drama, plenty of celebrities, and we all knew what would happen at the end.

Taking the No. 1 spot on a historically slow box-office weekend is "The Hitman's Bodyguard," bringing in an estimated $10 million in its sophomore weekend. That pushes the action comedy's 10-day total to just about $40 million — and that's the last bit of good news you're going to hear today.

The box office made $64 million total this weekend. The last time the box office did that poorly over an entire weekend was nearly 16 years ago.

"Hardball" was the No. 1 movie at the box office back then. If you need a refresher, "Hardball" is the one where Keanu Reeves coaches a black little league team and a young Michael B. Jordan goes the whole film without a haircut.

This weekend caps off a particularly slow summer box office. The revenue from this weekend is 44 percent lower than this time last year.

And even with big box-office hits like "Wonder Woman" and "Guardians of the Galaxy Vol. 2," this summer's total revenue is projected to be the lowest return in more than a decade.

It's hard to say what the problem is. But some analysts blame sequel fatigue and, of course, the golden era of television. Why go to the movies when you can watch Frank Underwood at home?

Either way, this a video about movies, so on to No. 2. Holding onto second place this week is "Annabelle: Creation," bringing in an estimated $7 million in its third week out.

Taking the No. 3 spot is the only new film to crack the top three. "Leap!" brought in an estimated $5 million in its box-office debut. The animated film about an aspiring ballerina was only released in limited theaters here in U.S., but it's been doing fairly well overseas, pulling in $58 million in foreign ticket sales.

As for next week, if you're really desperate for a trip to the movies, this classic will be re-released for its 40th birthday.

Correction: A previous version of this story said there would be no wide-release films over Labor Day weekend. "Tulip Fever" will have a wide release.