'We Shall Overcome' At The Center Of A Public Domain Dispute 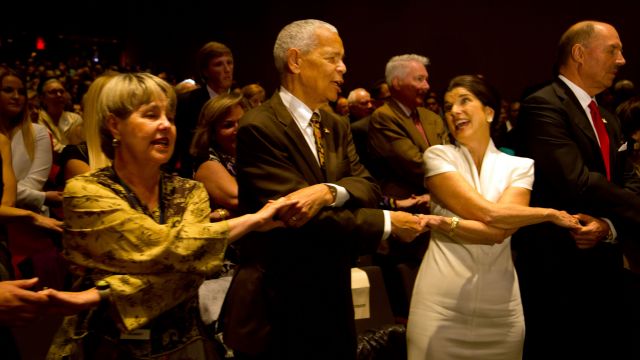 "Deep in my heart, I do believe, we shall overcome someday," Joan Baez sings.

The Library of Congress calls "We Shall Overcome" "the most powerful song of the 20th century," and now one group is claiming that the song should be owned by everyone.

The We Shall Overcome Foundation filed a lawsuit challenging the copyright of the song that's in the title of the organization, saying the song is "dedicated to public use and in the public domain."

Ludlow Music Inc., an imprint of The Richmond Organization, claims to have registered that copyright in 1960. But the lawsuit asserts it was never really Ludlow Music's to begin with.

"We Shall Overcome" contains lyrics similar to an African-American spiritual. One of the first printed versions of the song appeared in the United Mine Workers Journal in 1909.

That was later corroborated by folk singer Pete Seeger.

"It said we started every meeting with a prayer and singing that good ol' song, 'We Will Overcome,'" Seeger said in an interview with Pacifica Radio.

Seeger had also published the song in a newsletter intended to "create, promote and distribute songs of labor and the American people."

Some are comparing this lawsuit to another one centered on another popular song. Interestingly enough, the lawyers who worked to get "Happy Birthday" in the public domain are doing the same with "We Shall Overcome."

Along with the song being placed in the public domain, the "We Shall Overcome" lawsuit asks for Ludlow Music to return licensing fees it has collected from the song — which could be in the millions.

This video includes clips from PBS, Pacifica Radio and CBS.