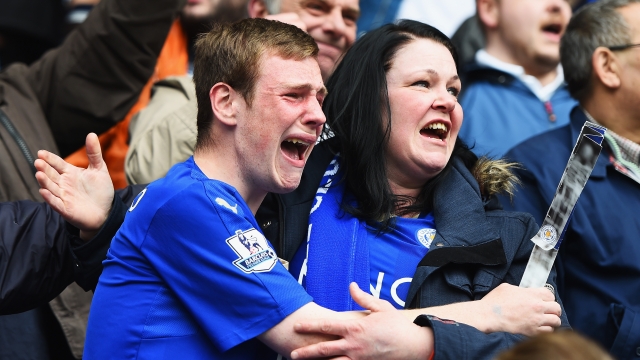 SMS
We're On The Verge Of Seeing The Biggest Upset In Sports History
By Carter Woodiel
By Carter Woodiel
April 17, 2016
Leicester City was given the same odds of winning the Premier League as Kim Kardashian has to be elected president. Now, the team's a virtual lock.
SHOW TRANSCRIPT

English soccer club Leicester City is closing in on one of the biggest upsets in the history of sports, and it's not even particularly close.

Leicester has a commanding lead in the English standings with just four matches left in the season. Keeping in mind that playoffs aren't a thing in the Premier League, this makes them almost a lock to win the title.

To try and get a handle on how big this upset is, let's take a look at some other English bets that had the same odds as Leicester winning the title at the start of this year.

They include: Elvis being found alive, finding proof the Loch Ness monster is real and Kim Kardashian being elected president in 2020.

As crazy as a President Kim K. sounds, those odds made sense. This time last year, the Foxes sat in 18th place in the 20-team league and were expected by many to be relegated to the second tier.

"It'll blow my mind away, absolutely," one Leicester supporter told ESPN. "I'd probably be in tears, quite honest with you."

The odds get even longer when you consider how much payroll factors in when you're talking world soccer. The best clubs in the world are usually the most expensive ones, and some are far richer than others.

Leicester is one of the poorest clubs in the Premier League. For perspective, the next four teams behind them in the standings have an average payroll nearly four times greater than Leicester's.

In terms of other sports upsets, Leicester's is still hard to size up. Even the Miracle on Ice, when the U.S. Olympic hockey team shocked the Soviet Union in 1980, had 1,000-to-1 odds of an American triumph, far better than Leicester's.

Another important thing to remember about Leicester's run is how it wasn't just one lucky win over a favored opponent. The Foxes have been the toast of the Premier League throughout the entire season.

And though the odds were stacked against them, there were some Leicester fans who bet on their favorite team. One fan put $71 on them at the start of the year and cashed out of the bet in early March — to the tune of over $100,000 of profit.

This video includes images from Getty Images and clips from ESPN, Chevrolet and Walt Disney Pictures.