What Will It Take To Protect More Of The Oceans From Climate Change? 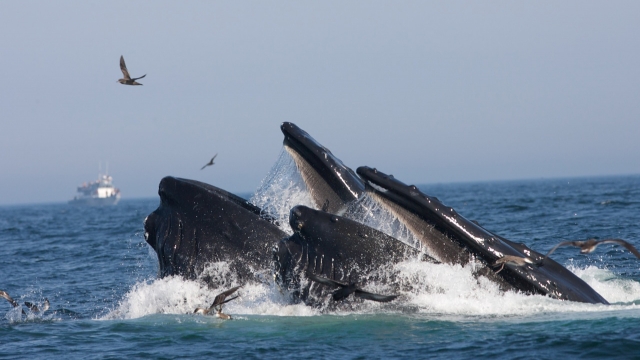 As the planet warms, there are calls to expand protected areas of the ocean, which buffer many different ecosystems from the effects of climate change. But effective expansion of marine protected areas requires effective enforcement — and that has a lot of moving parts to keep track of.

In the U.S., for example, federal, state and local authorities oversee  more than 1,200 MPAs, which have a combined area about twice that of Alaska. These areas can lower climate stresses on the plants and animals that live there. They can preserve the carbon-capturing abilities of coastal vegetation, they can buffer developed land from the effects of climate change, and they can be a benchmark — a healthy environment that shows what effects the climate is having elsewhere.

But they can only do all this if they have the right support.

"It's not just about having a set of fancy technology. What's needed is an entire framework that can support the protection of an MPA."

Elizabeth Murdock directs the Pacific Oceans Initiative for the Natural Resources Defense Council. She talked with Newsy about what makes marine protected areas effective and whether what works now will work well going forward.

"You have [to have] clear boundaries, so fishermen know when they're in the MPA and when they're not," Murdock said. "Also public education, so people know there's an MPA there. You also need enforcement by trained officers that have clear mandates and broad powers. You need a strong legal framework that includes swift legal action, and some sort of certainty that there's going to be follow-through."

"All those things we just talked about require policies to be put in place, and require human resources to be able to implement them, sometimes technological resources," Murdock said. "Having the commitment of a government to make sure those things happen, and an interested public that may push for those things, is really crucial to getting what you need on the water."

In some places, this is working well so far. Murdock says California has established 124 interconnected MPAs up and down its coast that protect more than 16% of state waters.

"They were designed as a network. They were designed to allow for biological exchange between the different protected spots along the coast. All of that's really important to helping secure resilience of the ecosystems and the species, especially in the face of changing ocean conditions."

On the broader scale, Murdock says, NRDC and other stakeholders want to push past the world's current ocean protection targets and reserve 30% of the oceans by 2030. There's also work underway at the U.N. to improve the process for designating MPAs on the high seas.

This will all require more resources — but Murdock says if the government and the public buy in to supporting the whole MPA framework, the model California has followed could work for more countries.

And it could be necessary if we want to preserve the oceans as we know them in the future. The research suggests sticking to our protection goals of around 10% won't be enough to maintain today's ecosystems or biodiversity.