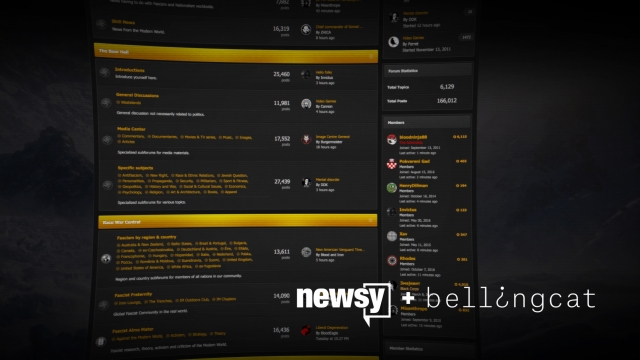 Neo-Nazis and white supremacists often recruit new members through online forums. And before it was shut down in 2017, Iron March was one of the most popular.

Now, thousands of messages and usernames from that forum have leaked. And using online tools, we can now trace back several of those usernames to active duty members of the U.S. Marine Corps, Army, and Navy — one of whom even tried to recruit new members to join a neo-Nazi paramilitary group on U.S. soil.

These are some of the thousands of usernames and messages leaked in a massive data dump on Archive.org that show the contents of the Iron March message board. It became an online hub for radical fascist beliefs and recruitment before it was shut down in 2017.

Previous reporting from Vice and Newsweek found two U.S. Marines and one soldier in the Army active in this white supremacist forum. Based on this Newsy+Bellingcat report, the Navy confirmed it too had an active duty member in the forum. And through social media, we found four more people we could connect to active duty military service at the time they posted in the Iron March forum.

In one leaked conversation, a person who went by the username Niezgoda bragged about his plans to start a paramilitary group with another Marine who used the name ImperialGrunt.

One user, who claimed to be in the Navy, went on an extensive rant about Jewish people punctuated with racial slurs in his introductory post on the forum.

Combing through all these usernames and messages in Iron March, we found dozens of conversations mentioning military experience, sometimes in discussions over how to recruit more members of the military into AtomWaffen Division — a neo-Nazi extremist group with the aim of overthrowing the U.S. government.

These conversations gave us a starting point. Working with our partners at Bellingcat, Newsy was able to connect email addresses tied to forum users with LinkedIn and Facebook accounts.

Those accounts, combined with other open source data like military graduation records and Skype accounts — led us to specific names. Those, combined with their social media pages, led us to photos and other information that helped back up that they were military.

In one case, a forum user who claimed to be in the Navy linked his birth date with his Iron March account. Once we used his email address to find his name, we were able to cross reference the name and birth date with Department of Defense data to verify he was active duty.

We asked U.S. Rep. Jackie Speier, the Chair of the House Armed Services Committee, whether the Pentagon was doing enough to combat white supremacy in the ranks. She told us, "The military services must make addressing this problem a priority and it troubles me that they are learning about these particular supremacists’ presence through media reporting and not their own investigation."

Spokesmen for both the Navy and the Army told us affiliation with hate groups violates their branch's values and that they prohibit military personnel from advocating supremacist causes.