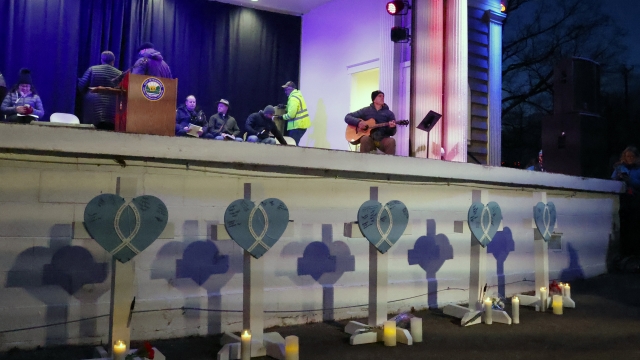 SMS
Waukesha Parade Suspect Appears In Court
By Ben Schamisso
By Ben Schamisso
November 23, 2021
Prosecutors plan to file a sixth count of first-degree intentional homicide, following the death of a child who was injured during the parade.
SHOW TRANSCRIPT

Darrell Brooks Jr. made his first appearance in court Tuesday. Police say he plowed an SUV through a holiday parade in Waukesha, Wisconsin Sunday night. So far, the incident has left six people dead and dozens more injured.

Standing before a Waukesha county judge, Brooks was formally charged with five counts of first-degree intentional homicide. Prosecutors say they plan to file a sixth count following the death of a child injured during the parade. These counts each carry a life sentence. His bail was set at five million dollars.

Police say Brooks was leaving the scene of a domestic dispute on Sunday when he began driving through the parade. In video from in the incident, parade goers can be seen jumping out of the way as Brooks’ car flies down the street.

This isn’t Brooks’ first run-in with the law. The 39-year-old Milwaukee resident has been charged with crimes 16 times since 1999 and had two pending cases against him. He was freed after posting $1,000 bail just two days before Sunday's deadly event. Earlier this month, he was accused of intentionally hitting a woman with his car after a domestic dispute.

In light of this information, lawmakers and others have begun calling for a reform of the bail system.

In a statement Monday, Milwaukee County District Attorney John Chisholm condemned the low bail amount in Brooks most recent case, writing: “The state’s bail recommendation in this case was inappropriately low in light of the nature of the recent charges and the pending charges against Mr. Brooks.”

Four of those killed were a part of the Milwaukee Dancing Grannies Group, which was performing at the parade. GoFundMe pages are being set up to assist those and their families who were injured or killed.

As the community grapples to come to terms with this tragic incident, many residents say they plan to lean on one another and stick together.