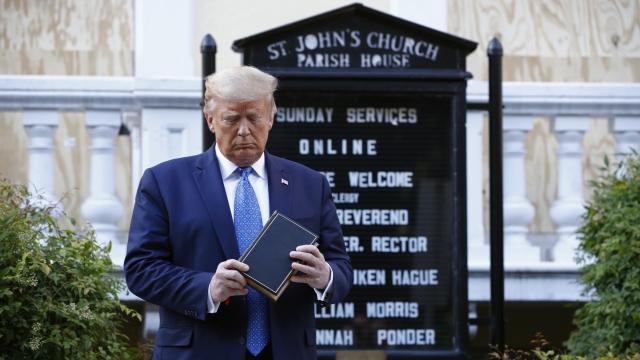 A new government report concluded the controversial clearing of peaceful protesters from Washington's Lafayette Square last June was not done to clear a way for former President Trump to take a picture with a bible outside a church.

In a new report, the Interior Department's inspector general said evidence shows it was done so a contractor could install fencing and that the project started "several hours before they knew of a potential presidential visit."

The report documents Trump's attorney general, William Barr, encouraging commanders shortly before the push to clear the protesters because of Trump, but being dismissed.

In a remarkable exchange, the report recounts the testimony of an unnamed Park Police operations commander: “The Attorney General asked him, ‘Are these people still going to be here when POTUS (President of the United States) comes out?’ The USPP operations commander told us he had not known until then that the President would be coming out of the White House and into Lafayette Park. He said he replied to the Attorney General, ‘Are you freaking kidding me?’ and then hung his head and walked away. The Attorney General then left Lafayette Park.”

On that day, police in riot gear used tear gas and rubber bullets to drive away protesters during nationwide outcry over the death of George Floyd.