WATCH: This Woman Stole A Ring From A Dead Body At A Funeral Home 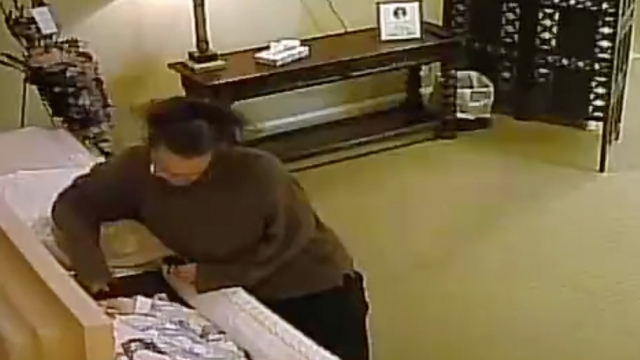 SMS
WATCH: This Woman Stole A Ring From A Dead Body At A Funeral Home
By Newsy Staff
By Newsy Staff
April 12, 2016
Police say the woman entered the funeral home and grabbed the ring off a dead woman's finger, although it was costume jewelry valued at $10.
SHOW TRANSCRIPT

Police are looking for a woman who allegedly snatched a wedding ring off a dead body.

The woman allegedly entered the room and acted like she was holding the 88-year-old dead woman's hand. Police believe that's when she grabbed the ring off Lois Hicks' finger.

One of Hicks' family members said: "To get it off, as you can see in the video, the lady struggled to get it off. You can see the coffin shaking. It was horrible. It's just an evil thing to do."

She took off but supposedly didn't get away with much: The ring was costume jewelry valued at about $10.

Still, she's expected to be charged with a felony if caught. Police say the woman left in a red or maroon four-door Saturn.

Family members of the deceased woman say they're not terribly concerned about the ring, but they want the ring-snatcher brought to justice.