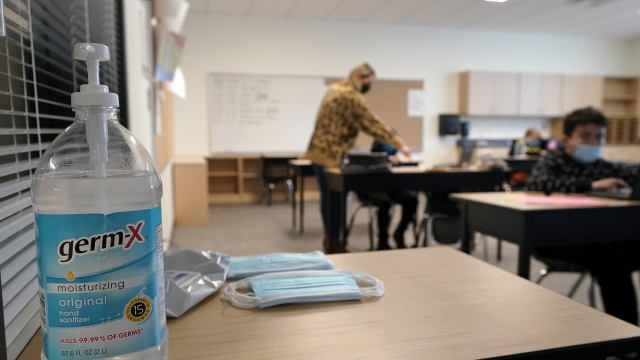 SMS
Washington School District Votes To Defy Statewide Mask Mandate
By Maritsa Georgiou
By Maritsa Georgiou
February 17, 2022
The vote violates the state mandate, prompting the district's superintendent to cancel school until they can figure out how to implement the policy.

Thursday marks day two of an emergency school closure in Richland, Washington. It's a flash point that symbolizes a fight playing out in many parts of the country.

The school board voted to immediately end mask mandates Tuesday.

But the vote violates the Washington state mandate, prompting the district's superintendent to cancel school until they could figure out how to implement the policy. She wrote a letter to parents Thursday saying shutting down schools was the last thing she wanted to do but bringing kids back would jeopardize funding, insurance coverage and would ask staff members to risk their jobs.

"I do not believe we have the right to ask staff to violate the law," Richland School District board member Rick Jansons said.

"I know that we have been running a marathon for close to two years. And I'm not willing to break my ankle when I can see the finish line," Richland School District board president Jill Oldson said.

The state superintendent of public instruction already sent the school district and another in northeastern Washington a first notice warning them about losing state funding if they don't comply with the mask mandate.

"Anyone who would threaten the education funding of a child when the state of Washington mandates by law that we provide a quality education for our children," Bird said. "I have an issue with that."

On Thursday Governor Jay Inslee complicated the situation, announcing the statewide mask mandate would drop March 21. Inslee says that's when projections show hospitalizations will be at a more manageable level.

"It's been a long, long journey," he said. "I know people would want to say it's totally over today or you know, at three o'clock this afternoon. That would not be consistent with where the science is right now. But I do understand the urgency that the desire obviously to do this today. It would not be safe to do this today."

The school would need to be in compliance before that change on March 21. That means more tough decisions for the district superintendent.

"To our students: Hang with this here till the 21st. Please wear those face coverings. It is the law," said Washington Superintendent of Public Instruction Chris Reykdal.

"I think this is an important teaching moment," Inslee said. "That I hope ultimately, educators will want to share with their students that even if we have disagreements, we follow the law. And I hope that that will be the prevailing sentiment."

The fight isn't unique to Washington. Pushback is disrupting learning in other places like Wayne, Pennsylvania and Bethalto, Illinois. And protests continue to pop up across the country.

"All the issues I've ever dealt with in education — there's usually some sort of middle ground where you know, it may not be perfect for everybody, but we try to find a compromise," said Missoula County Public Schools superintendent Rob Watson. "This one is drastically different in that it's pretty black and white."

In Montana, Governor Greg Gianforte issued an emergency rule at the end of August telling schools to consider allowing parents to opt out of school mask mandates. But he stopped short of banning the mandates altogether. Only a handful of Montana schools still have mask policies in place, but leaders are eyeing an end date based on health metrics.

"It's pretty divisive right now," Watson said. "But once we get past it, I hope folks understand that, you know, we've got to come back together for the best for our kids. And as a community, we have to pull back together and move forward."

But with the fight visibly raging on in places like Richland, Washington moving forward might take some time.