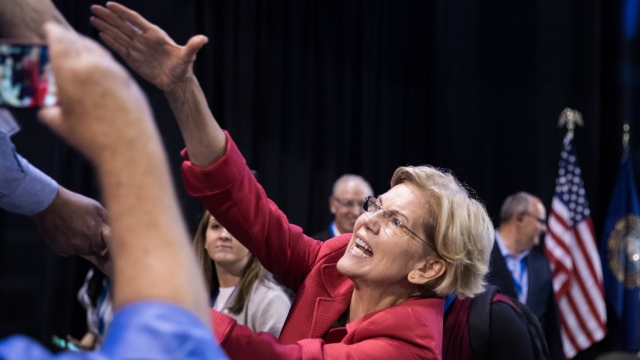 The U.S. Senator is leading former Vice President Joe Biden in some recent polls and following second behind him in others. She has made curbing the influence of Wall Street lobbyists and corporate money a centerpiece of her campaign.

"Look, the right of every person in this country to petition their government does not protect a multi-billion dollar influence industry whose sole purpose is to undermine democracy and tilt every decision in favor of those who can pay. So let's shut this industry down and return our government to the people," Warren said.

But how she intends to do that is controversial and would likely provoke legal challenges if enacted.

On Wednesday, Warren proposed a 75% tax on corporate lobbying expenses by companies spending more than $5 million to influence the government. Here's how that would work based on this chart, produced by the Warren campaign.

The health insurer Blue Cross Blue Shield spent $233 million on lobbying between 2009 and last year, according to figures from the Center for Responsible Politics. Under Warren's plan, the company would have paid $163 million in taxes for that period.

Legal observers say that's destined for challenge due to the Supreme Court's Citizens United ruling. The public policy firm Covington and Burling says such legislation "is extraordinarily likely to be struck down."

And Delaney Marsco of the government watchdog Campaign Legal Center said: "For the First Amendment purposes, it doesn't matter whether or not you call it a tax ... It has to do with whether or not speech is burdened."

Undaunted, Warren is also pledging to restrict corporate lobbyists from going to work for the government. And she is promising to break up "big tech" firms Google, Amazon and Facebook, as she explains in this campaign video.

"Big tech spent almost $50 million in lobbying last year alone. Clearly they know they have a lot to lose if Washington starts putting the interests of consumers first. It's time to break up these big companies so they don't have so much power over everyone else."

She already has a foil in Facebook CEO Mark Zuckerberg. He was caught on video saying Facebook would prevail in a legal challenge, but that filing "a major lawsuit against our own government" would "suck" for Facebook.