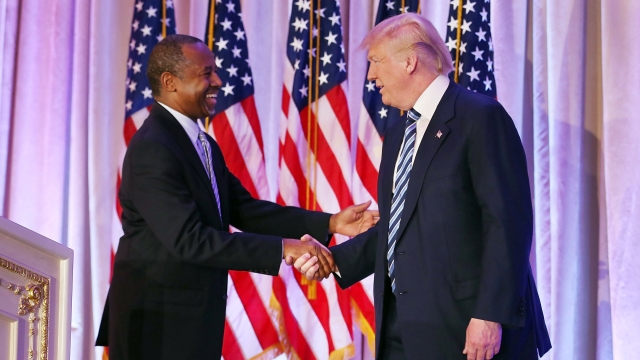 Sen. Elizabeth Warren of Massachusetts pressed former presidential candidate Ben Carson on whether he'd ensure that loans and grants from Housing and Urban Development do not benefit President-elect Donald Trump and his family.

Carson is up for the position of HUD secretary.

"I will manage things in a way that benefits the American people," Carson said. "That is going to be the goal."

Carson said he wouldn't definitively rule it out. He said if a program works for millions of people but also happens to benefit those Warren is "targeting," he wouldn't nix it.

But Warren pointed out Trump and his family have "significant business interests" in housing and development and that Carson might not be able to identify those potential conflicts.

"The president-elect is hiding his family's business interests from you, from me, from the rest of America," Warren said.

Other questions during the hearing centered around Carson's qualifications for the position. Many have noted he has no government experience.

But Carson says he believes there is a strong connection between housing and health, and he says his experience in the latter makes him a fitting candidate.