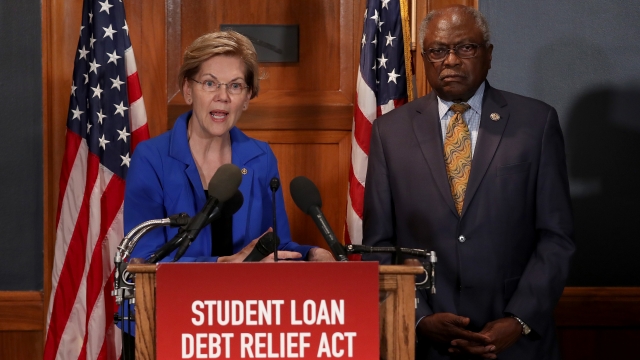 Presidential hopeful Sen. Elizabeth Warren introduced a bill on Tuesday that would cancel tens of millions of Americans' student loan debt. She first proposed the idea on the campaign trail in April.

Democratic Rep. James Clyburn is partnering with Warren and will sponsor companion legislation in the House. They're calling the bill the Student Loan Debt Relief Act.

The bill would relieve an estimated 95% of the 45 million people with student loan debt, with an emphasis on helping middle- and low-income Americans. It proposes forgiving up to $50,000 in student loans for households earning less than $100,000 a year. Households making between $100,000 and $250,000 would receive partial debt relief, with the amount gradually decreasing until the bill phases out. Households making more than $250,000 would not be eligible.

Borrowers with private loans would be allowed to refinance their debt into federal loans so they could be forgiven.

On top of all that, the interest rates on all existing federal students loans would be lowered.

Existing income and debt information would determine who qualifies, so borrowers would not need to submit applications.

When Warren first proposed forgiving student debt, she also mentioned a plan to make tuition free at public colleges. Her campaign said that would also be paid for with wealth tax revenue.

Under the Student Loan Debt Relief Act, student loan payment collections would be suspended for a year while the Education Department carried out the loan forgiveness program.