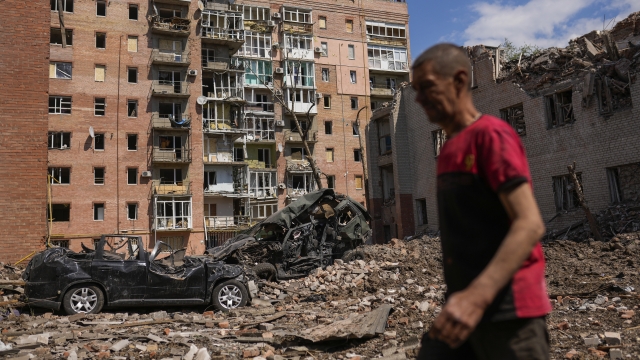 Three months of bloodshed and destruction began with warnings.

"We are in the window when an invasion could begin at any time should Vladimir Putin decide to order it," U.S. National Security Adviser Jake Sullivan said.

Then came a legal stunt by the Russian president. Vladimir Putin formally recognized the independence of two separatist enclaves long supported by Russia, and announced what he called a "special military operation."

Just before sunrise on Feb. 24, missiles struck the capital, Kyiv. In those early hours, Russian forces targeted military infrastructure and a nearby airport. Despite a U.S. offer to evacuate, Ukrainian President Volodymyr Zelenskyy refused to leave, emerging as a voice to rally his country.

"This night the enemy will use all the forces available to break our resistance," Zelenskyy said. "Treacherously, viciously, inhumanly. This night they will make an assault upon us. We all have to understand what we are going to face. This night we have to withstand. The fate of Ukraine is now being decided."

Ukraine's armed forces and volunteer fighters defended cities across the country, heavily relying on billions of dollars' worth of American weapons. And Russia’s attacks quickly blurred the line between soldier and civilian: They seized the Chernobyl and Zaporizhzhia nuclear power plants, holding staff at gunpoint. They hit residential buildings, schools, hospitals, a Holocaust memorial site, a home for the elderly, a train station full of people trying to flee, even a theater with the word "CHILDREN" written in cyrillic on the pavement outside.

"Putin is the aggressor," President Joe Biden said. "Putin chose this war. And now he and his country will bear the consequences."

International sanctions and condemnation did not stop Russia’s cluster bombs and hypersonic missiles. Peace talks did not bring peace, and three negotiators suspected they had been poisoned by the Russians.

Inside Russia, citizens who protested the war were arrested, the word “war” banned. But a 40-mile-long convoy of tanks, armored vehicles and artillery stalled — like so many of Russia’s plans for Ukraine.

Sweeping military losses drove Russian forces in the north to retreat. That revealed mass graves and tortured civilians scattered on the streets of liberated towns and cities, like the Kyiv suburb of Bucha.

Some crimes were less visible. Ukraine's ombudsman for human rights said a group of young women and teenagers were systematically raped in a basement.

"In all my 95 years, I've never experienced anything like this," a woman from Bucha said. "I survived the 1933 man-made famine, the war in 1941, but never seen anything as horrible."

Russian forces have since regrouped, focusing on Ukraine's south and east, beyond fighting, abducting mayors, and erecting filtration camps. The assailed port city of Mariupol became a symbol of defiance. Ukrainian fighters were holed up beside civilians in the sprawling Azovstal steel plant refusing to surrender.

"We're taking heavy casualties. We're taking losses," Ukrainian Army Lieutenant with the Azov Regiment Illya Samoilenko said. "Every day might be our last. We have extremely limited resources, that are very short. As for now, the result of this might be our imminent death or capturing by the enemy which also means death for us."

Last week, Russia took control of the steel mill. But the Pentagon says the nearly three-month fight took Russian battalion tactical groups away from other operations.

And the U.S. intelligence community says Putin is preparing for prolonged war, and betting the West’s resolve to support Ukraine will weaken over time. But today, three months in, Ukrainians tell Newsy the continued flow of Western weapons means the world is not yet looking away.