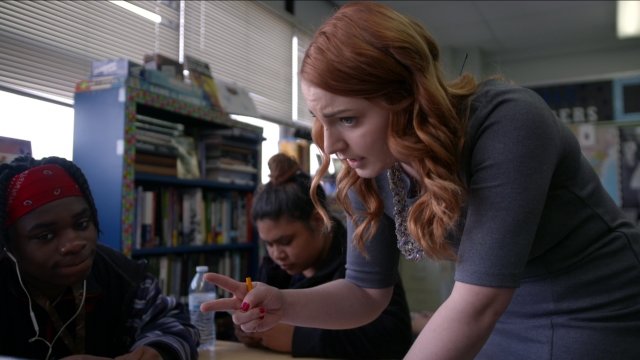 "Walkout" goes inside the classroom to profile the teachers joining a national movement for increased education funding and teacher pay. In Oklahoma, the state with the lowest average teacher salaries nationwide, this Newsy special report shows the impacts of education cuts firsthand, as students go without supplies and teachers struggle to make a living. Meanwhile, legislators deal with shrinking state revenues and ongoing school closures.

Public school teacher pay in Oklahoma ranges from a minimum of $31,600 to a minimum of $46,000, depending on experience and education. To get the top amount, you must have a doctor's degree and 25 years of experience.

Their salaries are 49th in the nation, according to the National Education Association.

Since the Great Recession, Oklahoma cut the most from general education funding per student.

Since 2008, U.S. enrollment has grown. At the same time, education jobs have fallen. The same is true in Oklahoma, according to a Newsy analysis of data directly from the Oklahoma Department of Education.

These are the Oklahoma Education Association Demands.

Michael Leachman works for the Center on Budget and Policy Priorities. He co-wrote the paper "A Punishing Decade For School Funding."

In February, Oklahoma representatives voted 63 to 35 to increase taxes to give teachers a pay raise. The bill failed after falling short of the supermajority requirement. 17 democrats and 18 republicans voted against the bill.

4 days before the walkout, the governor signed a historic education funding package. It met the supermajority requirement and was the first tax increase bill in 28 years. The package increased taxes on cigarettes, motor fuel, gross oil and gas production, and put a cap on itemized deductions. It gave teachers an average $6,000 pay raise. It gave support staff a $1,250 raise. It also funded 1/4 of the union's ask for general education funding. The Oklahoma Education Association said it wasn't enough.

Some teachers in Oklahoma called for an end to the state's capital gains tax break. It would save about $100 million and is supported by 55 percent of registered voters according to a survey by Global Strategy Group for OK Policy.

After two weeks of protest, no additional pay raises or education funding were approved by Oklahoma lawmakers — falling short of teacher demands. Facing no legislative movement, the Oklahoma Education Association ended its walkout.