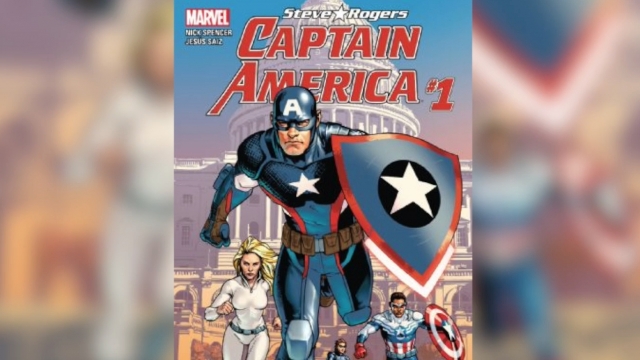 SMS
Wait. What?! Captain America Has Been A Hydra Agent The Whole Time?
By Ryan Biek
By Ryan Biek
May 25, 2016
Historically in Marvel comics, Captain America and Hydra are sworn enemies, but a new comic released Wednesday has Cap joining the organization.
SHOW TRANSCRIPT

Captain America –– the star-spangled avenger –– has been an undercover member of a former Nazi organization all along.

In the stories up to this point, Hydra has always been Captain America's nemesis, with its roots in Nazi Germany.

It's a huge shock, considering Captain America comics started during WWII and for 75 years the character has been arguably Marvel's epitome of patriotism.

Yet one of the writers told Entertainment Weekly: "This is not a clone, not an imposter, not mind control, not someone else acting through Steve. This really is Steve Rogers, Captain America himself."

Twitter was buzzing as the newest comic was released Wednesday morning, but not necessarily the way Marvel would have liked — #SayNoToHYDRACap was trending.

Given the success of Marvel's latest film "Captain America: Civil War," this Hydra twist comes at an interesting time –– not just for the character on a symbolic level, but also on a personal one.

Not to spoil too much, but in the latest movie, Captain America comes to the aid of a friend who's struggled to break free of Hydra's mind games.

With this new comic introducing the idea that Cap has actually been a part of Hydra all along, Marvel's most moral character may have some serious questions to answer.