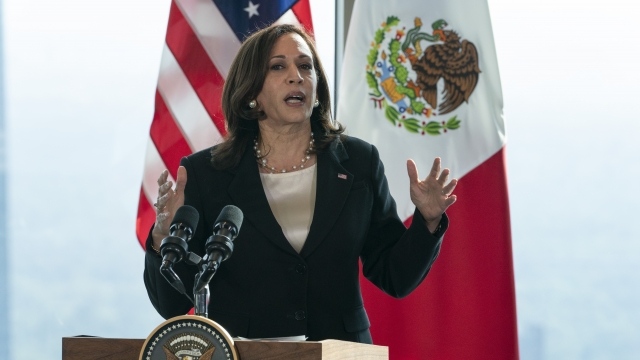 SMS
Vice President Harris Meets With Mexican President On Immigration
By Simon Kaufman
By Simon Kaufman
June 9, 2021
The trip primarily focused on the root causes of why migrants are heading north and how to foster cooperation with Mexico.
SHOW TRANSCRIPT

Vice President Kamala Harris is back in Washington after wrapping up a trip to Guatemala and Mexico.

She met with Mexico's president yesterday, looking to foster cooperation on migration to the U.S.

During the hour-long conversation, the vice president reportedly emphasized the longstanding "interdependence and interconnection" between the U.S. and Mexico.

"I want to be very clear that the problem at the border, in large part if not entirely stems from the problems in these countries," she said. "I cannot say it enough. Most people don't want to leave home. And when they do, it is usually for one of two reasons either they are fleeing harm, or to stay home means that they cannot satisfy the basic needs to sustain and take care of their families.”

Asked why she has not yet traveled to the U.S.-Mexico border, Harris said she had been to the border before and will go again, but this trip was focused on the root causes of migration.

Republicans have criticized her and President Biden for avoiding actually going to the border.