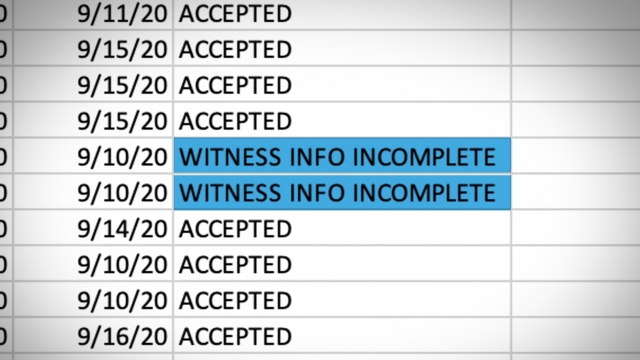 SMS
Witness Requirement Keeps Votes From Being Counted In Battleground NC
By Patrick Terpstra
By Patrick Terpstra
September 30, 2020
At least 1,700 mail-in ballots are in limbo in North Carolina because of missing witness information. They're largely from Democrats and Black voters.
SHOW TRANSCRIPT

Concerns about the coronavirus led Manoj Menon to vote absentee for the first time in North Carolina.

"While I am fit and healthy, I wanted to make sure that the mail, the vote, gets in," said Menon, who lives in Charlotte.

He said the only confusing thing about voting by mail was North Carolina's requirement to have a witness sign his ballot.

"It took a little bit of reading and re-reading to understand what the stipulation is," he said.

Menon got his wife to sign his ballot, but hundreds of other North Carolina voters are mailing in ballots without including witness information and signatures.

It's the most common error keeping votes from being processed in this battleground state, according to data Newsy reviewed from the North Carolina State Board of Elections.

As of last week, 1,704 mail-in ballots had been marked "witness info incomplete," unable to be counted yet.

The problem ballots were 1.1 percent of all mail-in votes received so far in a state where the presidential contest is expected to be close.

"If North Carolina is as competitive as it could be, there could be some races that get decided by these issues," Catawba College political scientist Michael Bitzer said.

Ballots with incomplete witness information were mostly from Democrats and disproportionately from Black voters.

Bitzer says that's likely because Democrats and people of color are voting by mail for the first time at a higher rate this year compared to Republicans and White voters.

"It's probably that lack of knowledge or lack of usage in the past that's causing some of the issues," Bitzer said.

It's an early sign witness signature rules could become a significant issue in North Carolina and in seven other states with similar requirements for mail-in ballots. The list includes Wisconsin, another possible tipping point state.

Getting a signature is supposed to prevent election fraud by having someone vouch for a voter.

"It does create a lot of problems for individuals, a lot of anxiety," she said. "Especially individuals that have some type of medical condition that they're already considering."

As of now, a witness signature is not required in South Carolina.

In North Carolina, local election officials are required to reach out to voters who send ballots without witness information.

"What they are doing now is sending you a certificate and asking you to complete it and then send it back, then your ballot can be cured," Bitzer said.