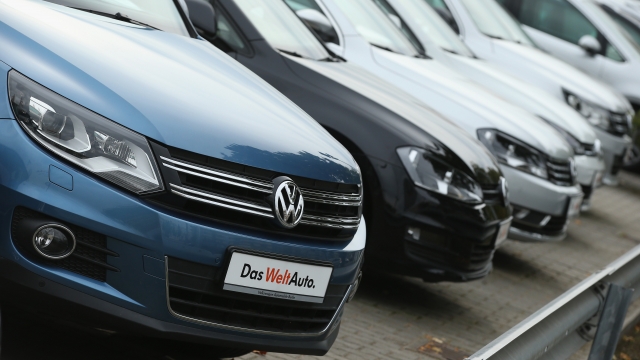 SMS
Volkswagen Agrees To Fix Or Buy Back Tons Of US Cars In Emissions Deal
By Katie Link
By Katie Link
April 21, 2016
According to Bloomberg, the settlement could cost Volkswagen some $10 billion.
SHOW TRANSCRIPT

Volkswagen may be ready to put its money where its mouth is. After months of apologizing for its emissions-cheating scandal, the German automaker has reached a settlement to start righting its wrong.

In a deal made in a California court Thursday, Volkswagen agreed to fix or buy back nearly half a million tainted diesel cars in the U.S.

The terms of the settlement haven’t been released, and the company has until June 21 to make some changes, but we do know the buyback applies to 2-liter diesel vehicles involved in the emissions scandal.

Volkswagen has been slapped with more than 600 lawsuits since admitting last September that it rigged cars to beat emissions tests.

In total, some 11 million Volkswagen vehicles worldwide were installed with devices to curb the number of pollutants released during testing so they could be deemed compliant under the Clean Air Act.

According to Bloomberg, this settlement will be a pricey one. A source told the outlet it’ll cost the automaker at least $10 billion. But by paying up, Volkswagen has a shot at escaping a trial.

Volkswagen released a statement after Thursday’s hearing that reads in part, “These agreements in principle are an important step on the road to making things right.”

This video includes clips from Volkswagen and images from Getty Images.