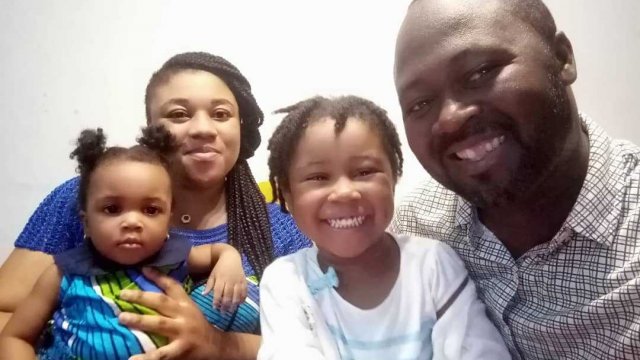 SMS
Visa Lottery Winners Pray For Pres. Biden's Repeal Of Visa Ban
By Ben Schamisso
By Ben Schamisso
February 1, 2021
The president is set to reverse Trump immigration restrictions on Tuesday. But it's unclear if he will end a pandemic freeze on most visas.
SHOW TRANSCRIPT

"We have the visa in our passport and we can't travel. It's crazy."

President Biden is set to reverse Trump immigration restrictions on Tuesday. But it's unclear if he will end a pandemic freeze on many visas and green cards.

Thousands of diversity visa lottery winners pray that he will — so they can use their once-in-a-lifetime opportunity to move their families to the U.S.

"Life would be so lovely, so colorful. Our dreams would come true," said Ijeoma "Golden" Kouadio.

Kouadio lives in Ivory Coast with her husband and two daughters. She has applied for the lottery many times in recent years, hoping for a peaceful life in the U.S. far away from her country's political instability.

A year ago, she was finally selected for the program. It allocates around 50,000 green cards each year to countries with low immigration rates to the U.S., many of them in Africa.

"I was so happy and I was pregnant. So the first thing I did was I rubbed my tummy, my belly, and then I said, 'This baby gave me good luck,'" Kouadio said.

Her good luck was short-lived.

Soon after she won, Donald Trump banned the issuance of most visas, arguing it would free up jobs for unemployed Americans.

Still, Kouadio's family eventually received their visas thanks to a federal court order. But there's a catch: They can only use them if Trump's freeze is lifted. And they permanently expire in March.

"The odds of being selected for this type of visa are so low that an individual who has been selected once will likely never be selected again," explained Rafael Urena, an immigration attorney who represents many diversity visa holders.

A White House advisor reportedly told a gathering of U.S. mayors last week that President Biden intends to repeal the freeze soon, though the White House declined to confirm.

Kouadio knows she can't celebrate yet.

"We spent resources, we spent money, we spent everything, energy. Most of the time now, we don't sleep. We are always on Twitter, always searching for news," she said.