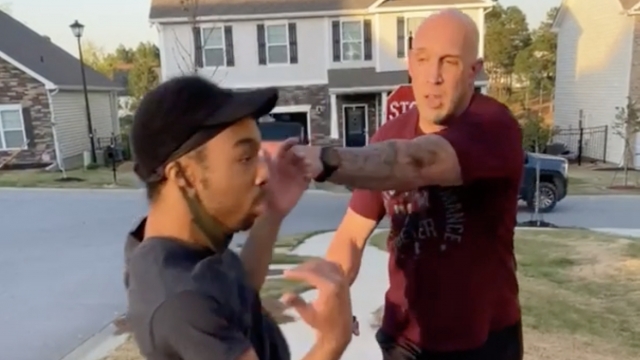 SMS
White S.C. Soldier Charged With Assaulting Black Man
By Terace Garnier
By Terace Garnier
April 15, 2021
Jonathan Pentland has been arrested in connection with a viral video that appears to show him shoving a Black man with a medical condition.
SHOW TRANSCRIPT

More protests are planned in the days ahead -- including the largest planned for Saturday. The White soldier seen shoving a Black man in South Carolina is now charged with assault.

Outside the home of 42-year-old Jonathan Pentland, demonstrators gathered with signs and megaphones to denounce what can be seen in this video: The Army drill sergeant and his wife telling a Black man he doesn’t belong in The Summit, a predominantly Black neighborhood near Columbia, South Carolina.

The man saying he was just taking a walk when it escalated.

"When the White man stepped off his property onto a public sidewalk to harass a Black man, that's where it went wrong," Lawrence Nathaniel said.

He said: “Right now, Black people cannot call for just equality. We have to call for liberation, to be liberated from the system that we have currently been under for the past 400 years. And yeah, we see progress, change. But those partners and change hadn't been significant enough to stop a young Black man from getting shot, or to stop people from harassing young Black people as they walk through their own neighborhoods."

The Richland County Sheriff's Department confirms it responded to a call of an altercation in the neighborhood.

They say people in the area complained the Black man had been approaching them in a “threatening manner,” leading them to ask the sergeant first class for help. But police say the victim had an underlying medical condition when the confrontation occurred.

“As an individual, if you see someone that has a disability and you have people yelling that he has a disability, then why would you harass him? And the thing is, why, it's because they're easier targets to harass,” Nathaniel said.

Leaders at Fort Jackson, where Pentland works, are also conducting their own investigation.

Pentland was arrested and charged with assault and third-degree battery Wednesday. The protest this Saturday is being planned on the state’s Capitol grounds.