Views From The Amazon: A Source Of Livelihood 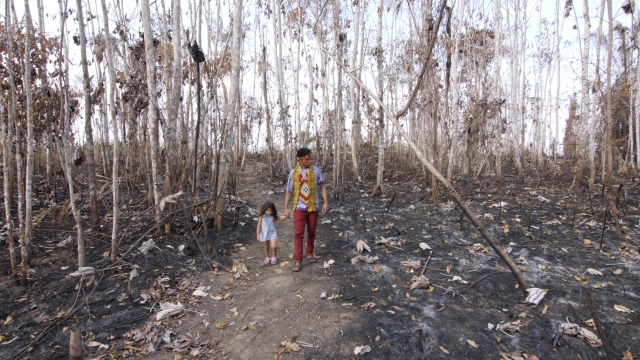 The Amazon rainforest is facing some of the biggest fires it's ever seen this year. While it's still not clear who, if anyone, is to blame, the fires' impacts are inarguable: Plant and animal life are being swept away, leaving charred land behind. Some people, including the indigenous population, are distraught. But others say the fires, and land clearing in general, can create space for badly needed development and economic progress. Newsy spoke with people on several sides of the issue about the massive blaze and what means for their livelihoods.

Jesuina Alves Braga: "We have no water. We have no water here. The lack of water is very great, especially at this time. You even have to manage the drinking water."

Foster Brown: We need the natural world to maintain cycles functioning on a global level and on a regional level. We have altered the planet already, and the danger of altering it even more is that we may disrupt some key cycles, one of them being water. Water is the perfect example. These global problems are manifesting themselves in the Amazon. So we are altering the balance, the energy balance of the Earth, and that has severe consequences for maintaining civilization on this Earth. We also live in a situation where everything is interconnected.

Assuero Doca Veronez: "Removal of the forest is essential for introducing pastures, crops in general. Then people remove the vegetation from the forest by cutting with chainsaws. And then the fire to clear the area."

Jesuina Alves Braga: "All we have is conserved. We don't need to use fire at all. I was forced to set fire on my land and my husband chopped down some trees so that the flames would not reach our house."

Txana Siã: "We suffered this fire. It was not easy, it was very difficult. Our people feel lifeless. We depend on the forest; we depend on our land to live. So when we see a forest being cleared, a burnt forest, our house was burned. We feel as one of our limbs being burned, it’s our house. The forest gives everything to us."

Assuero Doca Veronez: "The Amazon has about 25 million people. These people need ... and they dream of growing economically. They need to improve the quality of life. They’re poor. What are these people going to live for? The biggest enemy of the forest is poverty. This is the great enemy. Either an economic alternative is given, or an economic dynamic is created in the Amazon."

Assuero Doca Veronez: "I think the indigenous people have to be respected. Respect their culture. Their reservations have to be demarcated."

Txana Siã: "The message that I can send to our people, to our Txais, to our brothers, to the fellowship, that we will work together, that together we will be strong so that we can hold the Amazon standing. We need strength. We need unity. So when we see a devastation like this, we are not going to give bad energy, but instead love energy. Let's rebuild, let's plant again, it will grow. So haux haux. Haux haux is word of love. Two simple words, but they mean a lot of words: peace, light and love in general. Haux haux."