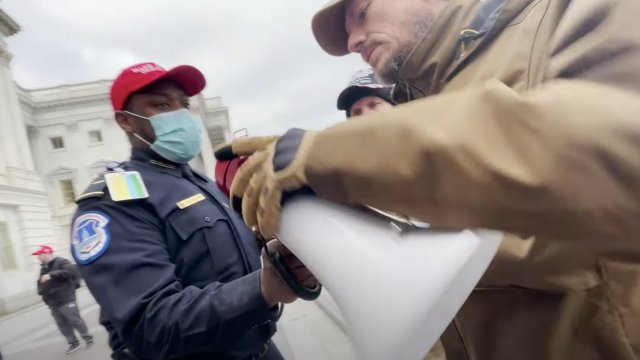 New video tonight showing a U.S. Capitol Police officer appearing to assist pro-Trump rioters during the Jan. 6 insurrection to move other officers out of the Capitol.

A video sent to Newsy shows an officer wearing a "Make America Great Again" hat talking to rioters on Capitol grounds away from the crowd, discussing how to get some of his fellow police officers out of the building.

"We're getting beat up, but the people who didn't vote for him are laughing at us," he says.

"How can we help you take control?" a protester asks.

"If you can help me save some of the guys."

"They're not going to leave do you want them to leave?"

"No, they can stay there, I just need to get the other officers out. They're scared."

The officer hands a rioter his megaphone to help lead him back into the Capitol to get the officers.

"You can even use my megaphone," the officer says.

The officer follows one of the rioters up the stairs.

And soon it's the officer leading the rioter back into the Capitol to help rescue police still inside. As they approach the entrance, rioters are heard yelling at the officer.

"If you let them leave, we can walk in!"

As the officer exits the Capitol with a handful of other officers, he puts his MAGA hat back on.

"The cops are leaving. We've won!"

The video was posted by Rico La Starza, who credits “Oathkeeps” for escorting the officer. According to the Southern Poverty Law Center, Oath Keepers is “one of the largest radical anti-government groups in the U.S. today," comprised of present and former law enforcement officials and veterans. This video and a second one of the same event are both posted on social media.

This, as several U.S. Capitol Police officers are suspended pending investigations into their conduct during the insurrection at the Capitol.

Congressman Tim Ryan told reporters Monday that two officers were suspended-- one for taking selfies with rioters and one for putting on a MAGA hat and leading rioters through the crowd.

Law enforcement expert Alex de Carmen says it would be rare for a police officer to utilize rioters to control a violent situation.

"We just don't do that in the law enforcement industry. I mean, I can understand behaviorally why he felt that maybe this would be an approach to help out his fellow officers. But he creates a great deal of confusion and he could have resulted in the death of someone, perhaps this officer, or even others that are inside the building as well."

Newsy reached out to the officer in the video, Congressman Tim Ryan's office and U.S. Capitol Police about this video.

USCP responded saying "The Department also has been actively reviewing video and other open source materials of some USCP officers and officials that appear to be in violation of Department regulations and policies."

The others did not immediately respond to our interview request or request for comment.