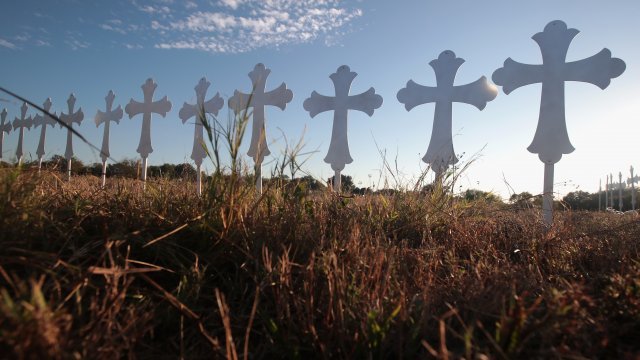 On Nov. 5, a gunman opened fire at the First Baptist Church in Sutherland Springs, Texas, killing 26 people and injuring 20 others.

The small town is located southeast of San Antonio. Many families lost multiple family members in the shooting.

Bryan Holcombe, 60, was the associate pastor at the church, and he was getting ready to speak at the service Sunday morning. He was killed alongside seven other members of his family, including his wife, Karla, 58. The other members of his family who were killed include his son Marc (Danny) Holcombe, 36, and Danny's young daughter Noah; Bryan's pregnant daughter-in-law Crystal Holcombe and three of her children: Emily, Megan and Greg Hill.

Annabelle Pomeroy, 14, was the daughter of the church's pastor. Her father, who was in Oklahoma during the shooting, called her "one very beautiful, special child."

Lula White, 71, was the grandmother of the suspected shooter's wife, and volunteered frequently in church. Her niece posted on Facebook: "I have no doubt where she is right now. She is in heaven laying her crowns and jewels at the feet of Jesus and celebrating."

Robert and Shani Corrigan were high school sweethearts who moved from Michigan to Texas. Robert was a retired U.S. Air Force chief master sergeant, and the couple is survived by two sons, both of whom are on active duty.

Joann Ward was killed during the shooting alongside two of her children: Brooke Ward, 5, and Emily Garza, 7. Joann's son Ryland, 5, was shot multiple times and is currently hospitalized. Joann is survived by her husband, Chris, and two other children.

Haley Krueger, 16, loved babies and wanted to be a nurse. Her mother said her daughter "loved life and was the most dramatic person."

Richard and Theresa Rodriguez were married for 11 years and were very involved in the church. Richard was a retired railroad worker.

Tara McNulty was a bartender in nearby Seguin, Texas; her boss called her a "very kind person" and a "great employee." Her children were wounded in the shooting and are recovering.

Dennis and Sara Johnson were married for 44 years. Dennis was a veteran of the Navy Reserves and Army National Guard, while Sara was a church nursery volunteer for 30 years. They're survived by six adult children and several grandchildren.

Karen and Robert (Scott) Marshall were visiting the First Baptist Church for the first time, looking for a new regular church to attend. Scott retired from the Air Force in 1990, while Karen was in the process of retiring from the Air National Guard.