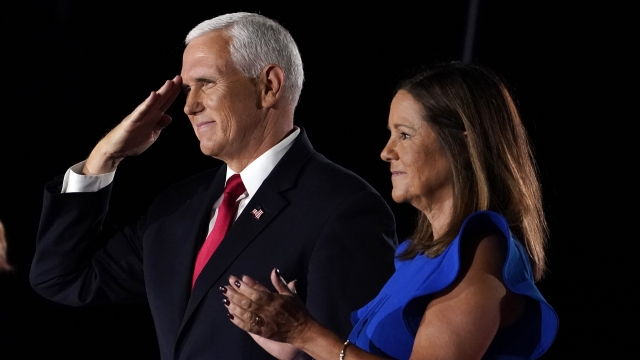 "The choice is clear to bring America all the way back, we need four more years of President Donald Trump in the White House," Vice President Mike Pence said.

Vice President Mike Pence used his keynote convention speech Wednesday to lay out what another term for President Donald Trump would mean for the country.

"We will have law and order on the streets of America for every American of every race, creed and color," Pence said.

The main focus of the third night of the Republican Convention was honoring the military and law enforcement. And it came amid social unrest in Kenosha, Wisconsin following the police shooting of Jacob Blake.

"Let me be clear: the violence must stop – whether in Minneapolis, Portland, or Kenosha. Too many heroes have died defending our freedoms to see Americans strike each other down," Pence said.

Pence delivered his address from Fort McHenry in Baltimore, Maryland -- the site that inspired Francis Scott Key to write the Star-Spangled Banner.

Freedom and a softening of the president's image were themes throughout the night. Speakers also continued a false portrayal of Joe Biden's views on police reform.

"Joe Biden has turned his candidacy over to the far left, anti-law enforcement radicals," Michael McHale, President of the National Association of Police Organizations.

The night also included a number of female lawmakers who used their platform to highlight their growing presence in the Republican party under the Trump administration.

"Americans from all walks of life are unified in support of our President. It's why more Republican women than ever are running for office this year," Rep. Elise Stefanik said.

There were also some surprises with President Trump making a previously unannounced stop to watch the Vice President's speech live.

The Trump campaign and the RNC have faced  backlash this week for using the White House as a backdrop for convention speeches and taped segments. Now that will happen at least once more when President Trump accepts his renomination from the South Lawn of the White House on Thursday