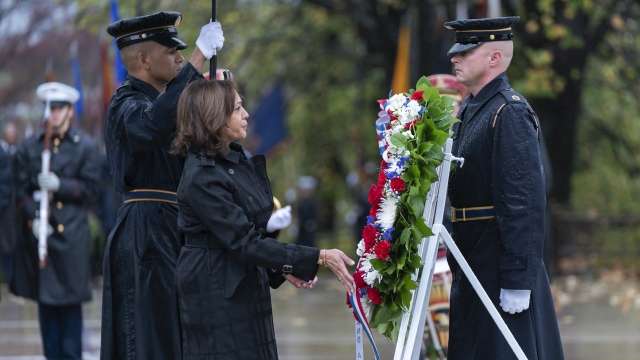 While President Joe Biden is overseas, the first lady, vice president and second gentlemen stepped in for some of the traditional Veterans Day events.

On the rainy Friday in Washington D.C., political leaders, veterans and the community gathered to honor Veterans Day.

"While today is a day of remembrance, it's also a day of celebration," said Karen Durham-Aguilera, the Executive Director of the Office of Army Cemeteries.

With President Joe Biden on an overseas trip, Vice President Kamala Harris was the one to place a wreath at the Tomb of the Unknown Soldier.

During her keynote address at Arlington National Cemetery, Harris pledged continued support for vets and their families and thanked them for answering the call to defend the country.

"American service members have sworn an oath not to person, not to a party, but to Constitution of the United States, to support and defend the principles of liberty, equality and justice, to preserve and protect our democracy," she said.

Though he is in Egypt for COP27, the president sent out a series of tweets for the day of remembrance.

This Veterans Day, we honor generations of patriots who have earned the title of “American veteran” — a badge of courage that unites the finest group of former service members the world has ever known.

We owe them an incredible debt that can never be fully repaid.

Across the Potomac River, the rain didn't stop hundreds of people from showing up at the Vietnam Veterans Memorial to honor the 40th anniversary of the wall's dedication.

Veterans Day dates back to the end of World War I in 1918, when it was known as Armistice Day. It officially became a federal holiday 20 years later. Then in 1954, Armistice Day became Veterans Day to include remembrance of all wars, not just World War I.