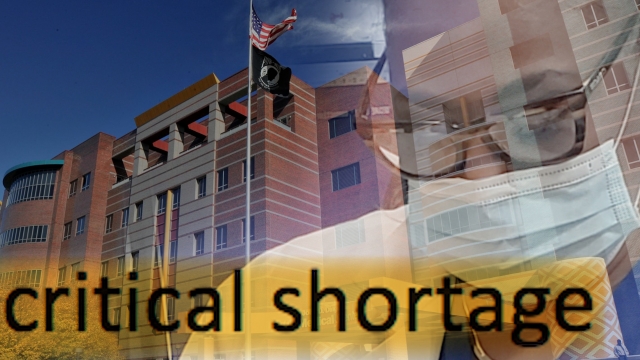 SMS
Rising COVID-19 Cases Among VA Nurses Cause Staffing Challenges
By Patrick Terpstra
By Patrick Terpstra
January 12, 2021
There was a "critical shortage" of Veterans Affairs nurses reported in 3 states, according to records reviewed by the Newsy investigative team.
SHOW TRANSCRIPT

Yvonne Evans worries there soon may not be enough nurses to work alongside her at the military veterans hospital in Detroit as coronavirus infections increase among patients and staff.

"The crisis is coming," Evans said, authorized to speak publicly as a member of the American Federation of Government Employees Local 933 in Detroit.

"The surge hasn’t quite hit yet," she said. "After this holiday, I honestly believe this surge is going to increase."

The John D. Dingell VA Medical Center was one of six VA hospitals in Midwest cities, including Cleveland and Indianapolis, described in a federal contracting document in December as facing a "critical shortage" of nurses "due to RNs becoming infected with COVID-19, as well as requirements to self-quarantine due to confirmed or probable exposure."

"It’s more intimate," said Rhonda Risner, an Ohio nurse and member of National Nurses United. "We’re changing them, bathing them, or feeding them."

Data reviewed by Newsy from the Department of Veterans Affairs shows cases of the virus among VA employees nationwide began a sharp climb in November as infections across the country ballooned.

The VA says its employee infection rate is less than one percent, lower than the six percent in all health care systems reported by the CDC.

While anyone who catches the virus can be sidelined, nurses out sick impacts health care of others.

Evans caught coronavirus in spring and still has breathing difficulty, limiting her ability to work.

"I was out for over three and a half months," she said. "This virus is no joke. And us front-line health workers, we’re right there in the battlefield.”

VA spokeswoman Susan Carter said the document referencing a critical shortage of nurses was a routine request for temporary contract nurses to assist with staffing during the pandemic.

She declined to answer whether the hospitals in need of more nurses got the extra help they requested but said the shortage described in the document "does not represent the current situation."

Risner said, "We would crawl across glass to take care of our people."

Evans said care has not suffered in Detroit despite staffing challenges.

"I love my vets," she said. "They served this country, they protect my freedom, and the least I can do is serve them."