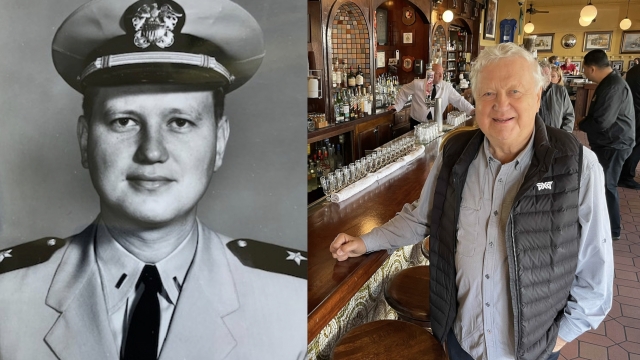 SMS
How Being A Veteran Cost A Restaurant Owner A Bite Of COVID Relief
By Patrick Terpstra
By Patrick Terpstra
July 22, 2021
Lawsuits blocking women and minority restaurant owners from getting COVID relief appear to be also locking out military veterans.
SHOW TRANSCRIPT

Freeman is also a Navy veteran.

“The military was good to me,” Freeman said, sitting at the same bar Andy Garcia picked up Meg Ryan in the ‘90s film, “When a Man Loves a Woman.”

Odd as it sounds, Freeman’s status as a veteran became a problem when he applied for a federal COVID relief grant for the iconic eatery just above Fisherman's Wharf.

“I wouldn’t have checked ‘veteran’ if I thought it was going to do what it did to me,” Freeman said.

He was supposed to be at the front of the line to get a grant from the Restaurant Revitalization Fund.

Congress required the Small Business Administration to prioritize restaurateurs who are military veterans, women or socially and economically disadvantaged, a category that includes people of color.

In May, the SBA emailed Freeman, “Congratulations, award approved.”

The agency promised to pour well over $1 million into the Buena Vista, money that wouldn’t have to be paid back.

“We didn’t have a party, we didn’t jump up and down but said wow that’s good,” Freeman said.

He planned to spend the cash hiring back furloughed staff and making structural repairs on the building, more than a hundred years old.

The SBA had emailed again to say the money would not be coming after all.

The agency would not be able to disburse his grant because the government had just lost legal challenges against the Restaurant Revitalization Fund.

Conservative groups had successfully argued that the SBA was discriminating against white men by prioritizing women and minorities.

“The government is not supposed to treat anybody differently based on race and gender,” said Dan Lennington, an attorney for a group of plaintiffs in one of the cases and deputy counsel at the Wisconsin Institute for Law and Liberty.

It appears an unintended consequence of that litigation was that, along with women and minorities, at least some veterans also lost their priority status for the fund.

“We never sought any changes in the program with regard to veterans,” Lennington said.

The SBA says the ongoing legal cases limit what it can explain about who had their grants rescinded.

The agency would not answer why it would freeze a payment to a veteran if the lawsuits were about race and sex.

It’s possible the SBA was interpreting one ruling that said funding for restaurants should be “first-come, first-served.”

The number of restaurant owners impacted is unclear.

The SBA has acknowledged 2,965 restaurant owners given priority consideration had their grants pulled after the lawsuits.

The SBA said it could not break down how many were women, people of color or veterans.

“That’s one of the three biggest lies in the world, ‘the check’s in the mail,’” Freeman said. “Well, the government just perpetrated that crime, in my mind.”

Instead of mailing a check, the SBA added the thousands of denied restaurant owners into the general pool of applicants hoping for assistance.

By that point, the relief program was almost out of money.

Freeman and the Buena Vista Cafe would get nothing before the fund ran dry.

Of more 101,004 restaurants that received funding, about 6 percent were owned by veterans.

The majority of all restaurant owners who applied for help, about 64 percent of all applicants, couldn’t get a penny before the funds had been all awarded.

“They ran out of money, that’s what they said,” said Tiffany Tabron-Jones, owner of The Posse on Broadway Lounge, a barbecue joint in St. Louis.

Congress had set aside far too little to meet the need from restaurants, still suffering even as customers get back to dining out.

Renovations at the Buena Vista Cafe will now have to wait.

“This was kind of the lifeline that was going to get you back in business,” Freeman said. “Now it’s gone away. It’s the most un-American thing I can imagine.”

Restaurant owners now hope Congress will feed billions more dollars into the relief fund that left so many still hungry for help.