Venezuelans Hold Out Hope For Guaido In May Day Protests 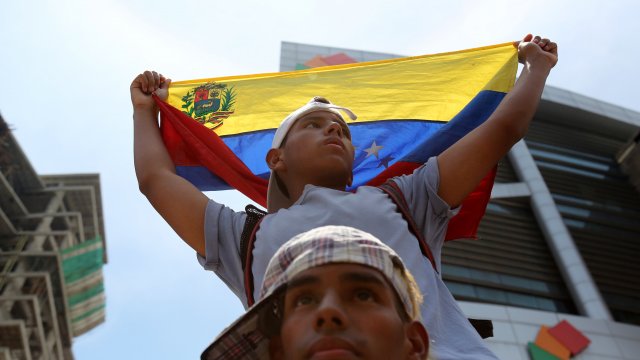 SMS
Venezuelans Hold Out Hope For Guaido In May Day Protests
By Matt Picht
By Matt Picht
May 2, 2019
Venezuelan President Nicolás Maduro is still holding on to power, but demonstrators are rallying to opposition leader Juan Guaidó's calls to oust him.
SHOW TRANSCRIPT

Protesters thronged the streets of Venezuela's capitol city Caracas on May Day, mostly in response to opposition leader Juan Guaidó's call to arms against the government of Nicolás Maduro.

Many of the demonstrators Newsy spoke to were optimistic that backing Guaidó's challenge to Maduro's leadership would change the country for the better.

Maduro still holds the support of a significant portion of Venezuela's population; and his regime is backed by the country's powerful military, despite Guaidó's efforts to win them over.

But while Guaidó's May Day push to oust Maduro has flagged, his supporters seem undaunted by the challenge overthrowing Maduro poses.

The U.S. has thrown its weight behind Guaidó, even going so far as to float the possibility of military intervention to oust Maduro. Guaidó's supporters in Caracas say they're grateful for the U.S. support, but are skeptical that the U.S. military should get involved in the crisis.