Venezuelans Fleeing To The US Join Fastest-Growing Immigrant Community 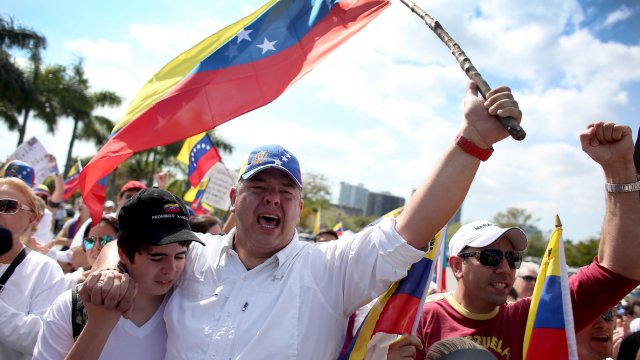 SMS
Venezuelans Fleeing To The US Join Fastest-Growing Immigrant Community
By Ben Schamisso
By Ben Schamisso
February 27, 2019
Meet two members of the growing community: One came to the U.S. 40 years ago. The other, her cousin, recently fled Venezuela and is seeking asylum.
SHOW TRANSCRIPT

Ana Gil-Garcia and Ana Salazar are two Venezuelan cousins sharing a home — and a kitchen — in Chicago.

"We're making arepas. It's like a sandwich, you know, you can fill it with anything. In this case we're going to fill it with white cheese," Gil-Garcia explained.

While their cooking skills are similar, their immigration stories couldn't be more at odds. Gil-Garcia moved to the U.S. 40 years ago with her kids because she received a green card and a job offer. At the time, she says, there were only 60 other Venezuelans in the city.

"We were a very small community. There was no Venezuelan restaurants in the city of Chicago. Now we have five," Gil-Garcia said.

Today, there are about 12,000 Venezuelans in Chicago and its suburbs. And that's just locally. Nationwide, the Venezuelan population grew eightfold in the last 30 years, making it one the fastest-growing immigrant communities in the U.S.

Many of them, like Salazar, are recent arrivals who left Venezuela because of the country's worsening conditions. In Venezuela, Salazar was a professor of medicine and an internist doctor responsible for a geriatric unit.

"There were approximately 52 adults in the unit. And to eat during the day, they would give them two chickens for 52 patients."

"And when I would go to the director of the institution to tell her I don't have the medication to treat my patients, she would tell me, 'I can't do anything.' But without medicine to treat the pathology of my patients, what can I do?"

That was the final straw for Salazar, who took up her cousin's invitation to come stay at her place in Chicago.

Gil-Garcia: "I knew she was really having a hard time in the hospital there where she was working. I said, 'Why don't you come?' She said, 'Could I?' I said, 'Yeah.' Why not? She's my family."

Salazar was able to fly out of of Venezuela because she had a tourist visa. She is now trying to validate her medical degree in the U.S. And, like many of her peers, she's seeking asylum. In the last two years, nearly 50,000 Venezuelans have applied for asylum protections in the U.S., making it by far the country with the most applicants.

"The crime rate increased a lot and those who break the law, many of them would hurt my students or kill them for a pair of shoes," said Salazar.

Besides her students and patients, Salazar also left behind her mother and brothers. But she says she can help them more from abroad.

Salazar: "From here, in some other way, I'm trying to help them because my mom is diabetic and hypertensive and obtaining her medicine costs us a lot of money and a lot of effort. We've had to look outside the country for friends who could do us the favor and send us the pills to Venezuela. It's the same for food: All Venezuelans are affected by long lines and the high cost of anything you can get your hands on."

To help send food and medicine to her native country, Gil-Garcia created the Illinois Venezuelan Alliance in 2016. The organization also supports recent immigrants in the state from a logistical and political standpoint.

Gil-Garcia: "I think the diaspora that was here has been very instrumental in helping you know, the new arrivals and that community has been the network that we've been using to find a bed, to get a chair, to find towels, you know, clothes, coats, where to go for food, you know, the food pantries, when they get sick, you know, those small hospitals that they can have access to that.

Gil-Garcia and Salazar are both hopeful about the rise of Venezuelan opposition leader Juan Guaidó. But their optimism is also tempered by the reality on the ground.

Gil-Garcia: "Sometimes I joke and I say well, you know, we have become so popular in the international media because we have two presidents, we have two national assemblies, we have two supreme courts, I mean, what else do we want? But we really want to have only one, and the legitimate one. I think we, in order to rescue and to recover the country, we will need at least 10 years."