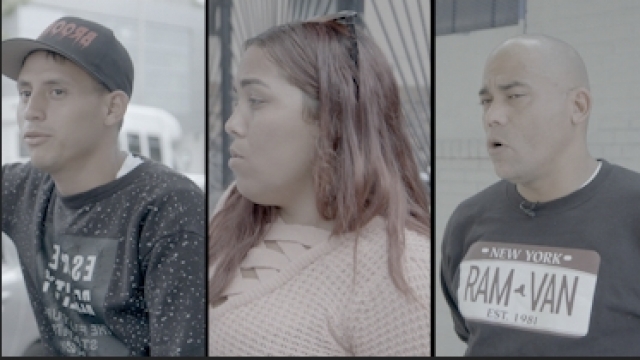 SMS
Venezuelan Migrants Faced Dangerous Journey To Flee Country
By Axel Turcios
By Axel Turcios
August 24, 2022
Hundreds of asylum-seeking migrants continue arriving in New York City in what has become a crisis in the Big Apple.

Michel, a Venezuelan migrant, says leaving Venezuela with his wife and five children was not an easy decision.

"When you make the decision to leave your country, it is not easy for us. It is not easy," said Michel.

Francelys Guedez says she didn't want to see her 12 year-old son continue living under a dictatorship in Venezuela.

"I don't want the dictatorship that exists in my country to live," said Guedez.

Michel Sagues is a Venezuelan migrant.

"I regretted it after being there," said Sagues.

For Sagues, the dangers he and his family could encounter on their journey gave them pause about leaving Venezuela. But home was too far away to turn back, and the future of his 20-month-old son was in his hands.

All of these parents are bound by the same conviction: their love for their children.

And they are some of more than 6,300 migrants seeking asylum in New York City in recent weeks.

"They already asked me for some documents, I think for registration," said Sagues.

Michel says he started the process of enroll his five children in school.

But for all of the migrants, language is a major obstacle.

NEWSY'S AXEL TURCIOS: How was the process when you tried to enroll your child in school?

MICHEL SAGUES: To be honest, it was a bit complicated because the school district doesn't have many people on staff who speak Spanish. I think one of the staff got kind of annoyed because he couldn't understand me, and I wasn't able to understand him.

It's a program that allocates more bilingual staff to help these migrants enroll their children in schools.

However, Murad Awawdeh, the executive director of the New York Immigration Coalition, says the Department of Education needs to do more.

"We need them to take this on more aggressively to ensure that the students are not just getting the basic educational supports in school, but that they're also getting the services in school that are going to help them continue to succeed in the educational environment," said Awawdeh.

The migrants are being bused to New York City from the Texas-Mexico border by Texas Gov. Greg Abbott.

Abbott has acknowledged it's a protest against what he calls President Joe Biden's out-of-control border policies overwhelming Texas communities.

And it's targeting Democratic city mayors like Eric Adams in New York City.

"Texas Gov. Abbott is using asylum seekers as political pawns in his efforts to build his own profile across the nation and also to get his poll numbers to increase in the state of Texas," said Awadeh.

Most of the migrants are from Venezuela, Colombia, Ecuador and Cuba and crossed the Darién Gap, a lawless stretch of dangerous, mountainous rainforest standing across Colombia and Panama.

Jaison Manrrique crossed the region with his five-year-old daughter and wife.

"As a father I never thought to put my daughter through those conditions, sleeping on the bank of a river without knowing if in the early morning the water level was going to rise and drag us," said Manrrique.

According to UNICEF, at least 5,000 children entered the jungle between January and June 2022.

After crossing the Mexico border into Texas, the migrants say they were seeking asylum, which allows them to legally stay in the U.S. before seeing a judge.

"They determined that this person could qualify for potential asylum. This may also apply to parents that come with their children and even if they have removal orders their children may qualify for a benefit. They don't want the child to be at burden so the parent might be allowed in," said Velazquez.

The immigration attorney says having an asylum claim doesn't give them automatic benefits.

"When they do file property, they still have to wait 150 days to get a chance to apply for the work permit. Once they apply for a work permit the average wait is at least three months," said Velazquez.

Without a work permit, they can not legally work in the country.

In the meantime, five-year-old Jaisbeli Manrrique knows what she wants.

She wishes to go to school and learn English.