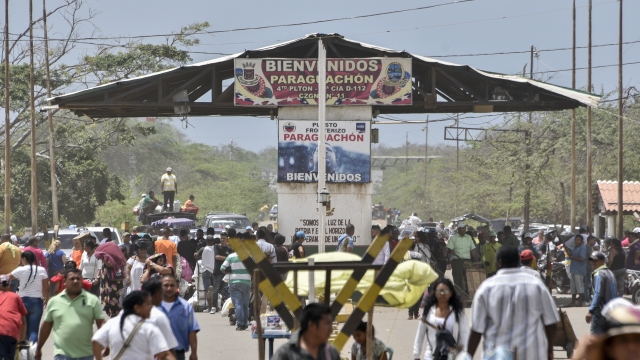 Venezuela reopened its border with Colombia Saturday. Thousands of people crossed for food, medicine and other supplies, or to flee the country.

President Nicolás Maduro ordered the border opening on Friday. He said, "We are a people of peace who firmly defend our independence and self-determination."

Maduro closed that border back in February after opposition leaders attempted to bring foreign aid into the country. Maduro let some aid in but feared assistance from countries that support opposition leader Juan Guaidó could be part of an attempted coup.

Last week, the United Nations announced that over 4 million people have fled Venezuela since 2015 to live as refugees or migrants elsewhere. One million have fled since last November.

Most of those 4 million people stayed in Latin America. Some 1.3 million alone are in Colombia. According to the U.N., only Syrian refugees surpass the number of displaced Venezuelans.

Those who have left their country often have no money due to the hyperinflation Venezuela's currency has been undergoing, NPR reports. And some of those leaving say they had to leave to find food.

Delegates for Maduro and Guaidó recently met in Norway for negotiations but failed to come to any agreement.