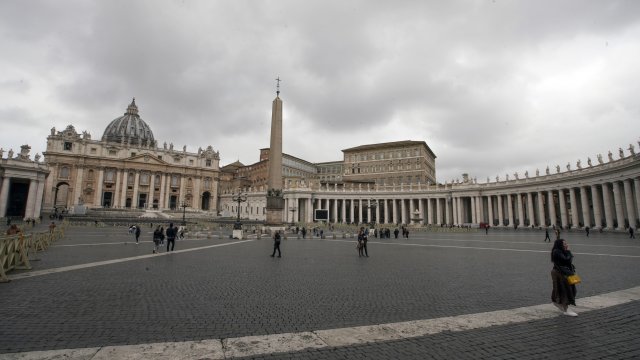 SMS
The Vatican Is The Latest Sacred Place Impacted By The Coronavirus
By Austin Kim
By Austin Kim
March 6, 2020
The Vatican confirmed its first case of the coronavirus, while holy Islamic sites in Saudi Arabia reopened for prayer after being closed for cleaning.
SHOW TRANSCRIPT

The Vatican has confirmed its first case of the coronavirus. It said a patient tested positive for the virus while being cared for in Vatican City's health care unit.

The unidentified person was diagnosed Thursday, according to a Vatican spokesperson. He added the Vatican's health care unit was closed for cleaning on Friday.

The sovereign city-state sits in the heart of Italy. The country has been hit hard by the outbreak, with thousands of confirmed cases. Schools and universities have temporarily closed, while sporting events are taking place without spectators.

Other religious sites have been impacted by the coronavirus outbreak. Saudi Arabia announced it has reopened two major Islamic holy sites. The Grand Mosque in Mecca and the Prophet's Mosque in Medina conducted services Friday after being closed for cleaning,  according to Saudi State TV.

Attendance for prayer services at the Grand Mosque has been down since the outbreak hit the region. Authorities recently suspended foreign pilgrims and tourists from entering Mecca or Medina.