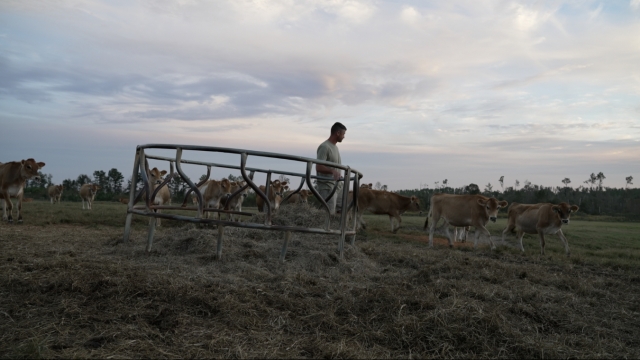 Living in the country can bring peace and tranquility. But there’s also a hidden risk. The International Journal of Epidemiology recently reported that people living in rural communities have a shorter life expectancy on average. There are many reasons for the disparity. The rural-urban divide can be seen in COVID case and death rates in some areas.

Tucked away off a rural road in the Florida panhandle, the air is fresh, the atmosphere is quiet and the way of life is peaceful.

It’s far from cities with larger COVID-19 vaccination rates. In Calhoun County, population around 15,000, about 1 in 3 of the total population are fully vaccinated.

“My family's been here about 70 years,” said Pierre Wesselhoeft, the farm manager of Ocheesee Creamery, on the county’s border.

“We haven’t been vaccinated. I mean I’ve worn a mask maybe one time the whole time. If they don’t want me to go in the store, I don't. I go somewhere else. I mean it’s their store. For our farm it hasn’t really made any difference at all,” said Wesselhoeft.

Like many in the rural community, he’s among those who have chosen not to get the vaccine.

Behind his choice, he explains concerns over its effectiveness, ethics and ingredients.

“Part of it is I’m not sure what’s all in the vaccine. I mean they don’t hand out ingredients, you know what I’m saying,” he said.

Wesselhoeft believes the vaccine should be a personal decision.

“For us I sort of judge it by the people around me and how they handled it. And for us it hasn’t been that big of an issue,” he said.

Throughout the Delta surge, health officials pointed to higher case rates where there were lower vaccination rates.

“There are pockets where there are uptake of vaccine but we’re not seeing much change in the administration of vaccines in rural areas,” said Brock Slabach, a senior vice president for member services at the National Rural Health Association.

“This latest surge had a huge impact on us in terms of just our hospital staff, community nursing homes, it really hit us hard in our community,” said Warren Bailey, the director of pharmacy at Doctors Memorial Hospital in Bonifay.

The hospital is seated in Holmes County, which has one of the lower vaccination rates in the state. Just over 1 in 4 of the total population are fully vaccinated. Bailey grew up in the area and said he gets questions all the time.

Bailey said they’ve brought the vaccine to remote sites away from the hospital, like churches and community centers, where people may feel more comfortable. He said it was a challenge to get the message out.

“We’re a county of approximately 19,000 people. Bonifay is in the extreme southeast corner of this somewhat rectangular shaped county and all these people live 20, 30 miles from us. And so they’re a long way from health care. Some of them are just thinking ‘well I live out here in the country I’m gonna kind of stay away from people,' and maybe just kind of take their chance with it. Especially since the vaccine was new to them and felt like something that was quote unquote ‘rushed to the market.' So I think that led to a lot of people being fearful of it,” Bailey said, also noting some residents traveled to Alabama for the vaccine.

But Rural America is not monolithic.

A Kaiser Family Foundation vaccine monitor report in September found of rural residents responding, about 1 in 5 said ‘definitely not’ to the vaccine, nearly 1 in 10 would wait and see, but more than 60 percent already received at least one dose.

Seventy miles southeast of the farm, just south of the state capitol in Tallahassee, there’s a tight knit fishing community.

Here livings are made off of oysters, relationships are built on the water, and on the boat of the Saucey Lady Oyster Company, the information catches differently.

“I trust it because I listen to the expert, Dr. Fauci,” said staff member Mark Chadwell.

The staff signed up for the vaccine as soon as they could.

“A lot of people were dying and I just didn’t want to get on that list. I got a little ways longer to live,” said Kenny Reynolds.

“I’ve got about a month left before I can get my booster but I’m looking forward to it,” said Theresa Kunkel.

In this coastal community, it’s a point of pride for business owner Tim Jordan.

“For the most part we’re in a relatively safe industry, being outside more than inside, but it only takes one person to give it to you,” said Jordan.

In Wakulla County, about 40 percent of the population is fully vaccinated.

It remains lower than the state average, in which more than 68 percent of the eligible population is vaccinated, higher than the US average.

The vaccine has offered the crew an extra sense of safety as they haul in oysters, hoping they’re big enough to take in, clean up and send off to a restaurant.

“I’m pretty passionate about it and I feel that we’re not as careful as a society as we should be and I think a lot of people have been politicized and that’s a tragic thing, because in my age I’ve gone through polio, mumps, chickenpox - Nobody every responded to vaccinations like they did now,” Jordan said.

The Ad Council launched a campaign sharing stories of seven families across Rural America about their decision.

“We really did want to make sure we were reaching all kinds of people in all sorts of places and that means we have to come at this effort a bit differently,” said Hannah Lipps, the rural campaign consultant on the vaccine campaign.

The effort includes connecting with trusted messengers and partners across Rural America, Lipps noting the the higher rates on average of COVID.

“These are really significant issues and we know rural America already faces shortages of health care providers, less access to emergency health care and routine health care overall and so the hope here is to protect our rural communities as much as we possibly can by sharing solid information with them to make sure they can make an informed decision for themselves and their families,” Lipps said.

Back at the farm-